Clinton County is a county located in the U.S. state of Iowa. As of the 2010 census, the population was 49,116. Its county seat is Clinton. Its name is in honor of the seventh Governor of New York State, DeWitt Clinton.

Clinton County was formed on December 21, 1837. It was named for DeWitt Clinton, a Governor of New York and most ardent advocate for the construction of the Erie Canal. The cities of DeWitt and Clinton were also named after him.

In 1835, Elijah Buell built a log cabin for himself and his family and was thus the first settler of the region. In 1854, the first newspaper was issued and in 1858, the Lyons Female College for girls opened its doors. The tuition was set at $175 per student.

The county has used three courthouses in its history. The structure currently in use was constructed in Romanesque style and opened in 1897.

Clinton county was first settled in 1836, by Mr. Bourne, who located upon Sec. 1, T. 80, R. 4, East. The county was surveyed in 1837, by the Messrs. Burtz. The Surveyor General's office was then at Cincinnati, Ohio. In 1840, the county was organized by Sheriff Bourne. In 1841, R. R. Bed ford and others formed a little settlement at De Witt, and during the same year Messrs. Wheeler and Evans erected a log court-house. In stepping from the past to the present, we quote the language of one of the "oldest inhabitants." He says: "Clinton County was originally settled by the poorest class of people on God's earth; and it is with great pleasure that I have witnessed their progress, slow but sure, and now find the most of them very comfortably situated." 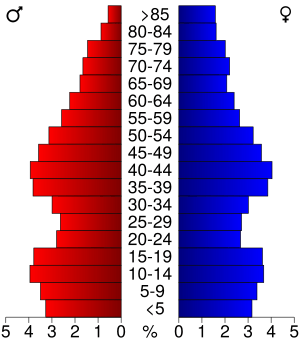 Clinton County is divided into these townships:

The population ranking of the following table is based on the 2010 census of Clinton County.

All content from Kiddle encyclopedia articles (including the article images and facts) can be freely used under Attribution-ShareAlike license, unless stated otherwise. Cite this article:
Clinton County, Iowa Facts for Kids. Kiddle Encyclopedia.