Grand Mound is a city in Clinton County, Iowa, United States. The population was 615 at the time of the 2020 census.

The Chicago, Iowa and Nebraska Railroad was built through the town site in 1858, and a train station was built. Grand Mound was platted in 1866. Grand Mound was named for nearby Sand Mound; a recording error accounts for the error in spelling, which was never corrected.

According to the United States Census Bureau, the city has a total area of 1.82 square miles (4.71 km2), all of it land. 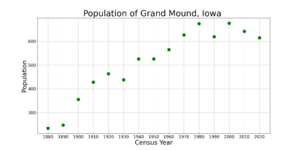 The population of Grand Mound, Iowa from US census data 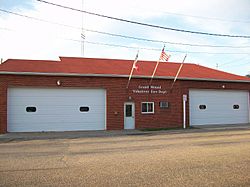 There were 243 households, of which 34.6% had children under the age of 18 living with them, 63.4% were married couples living together, 7.8% had a female householder with no husband present, 4.9% had a male householder with no wife present, and 23.9% were non-families. 16.9% of all households were made up of individuals, and 7.4% had someone living alone who was 65 years of age or older. The average household size was 2.64 and the average family size was 2.99.

Grand Mound Elementary was on a property of about 4 acres (1.6 ha) (35 rods, 10 feet by 18 rods). The first school building was built in 1917. Another school building, from 1954, had a cafeteria, a gymnasium, and two classrooms. In 1995 the district closed the original building because it was deemed to be structurally unsafe and its roof was in a poor condition. Circa 1999 that building was demolished. After the demolition the cafeteria began serving as an office, a school nurse area, and a reading and speech therapy instruction area. By 2001 Grand Mound Elementary served Kindergarten and the first grade. Grand Mound Elementary had 38 students in the 1998–1999 school year, and by 2001 the enrollment was down to 35. Grand Mound students used the library, media and computer facilities at Welton Elementary.

Circa 2001 there was a bond proposal to expand the elementary schools in DeWitt, which would have centralized services and facilities for the handicapped, and close the schools in Grand Mound and Welton. By 2002 the school closed, and was sold to God's Family Baptist Church. After the closure of Grand Mound (due to declining enrollment and concerns about the building's structural condition), students were bused to elementary schools in Welton and DeWitt; today (with Welton also closed), all elementary-aged students attend school in DeWitt.

Prior to the formation of the Central Clinton School District, Grand Mound had its own junior-senior high school, which operated in the same school building as the elementary school. Sports teams were known as the Cardinals. The last graduating senior class was in 1961, when Grand Mound—along with the Welton and DeWitt school districts—consolidated to form the Central Community School District.

All content from Kiddle encyclopedia articles (including the article images and facts) can be freely used under Attribution-ShareAlike license, unless stated otherwise. Cite this article:
Grand Mound, Iowa Facts for Kids. Kiddle Encyclopedia.