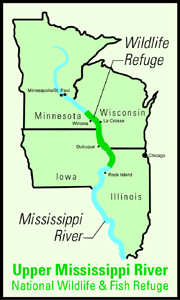 In its northern portion, it is in the Driftless Area, a region of North America that remained free from ice during the last ice age. Certain parcels contained within the refuge were later transferred to the Driftless Area National Wildlife Refuge.

The refuge is an important element of the Mississippi Flyway. It has many wooded islands, sloughs, and hardwood forests. The wildlife found here include the canvasback duck, tundra swan, white-tailed deer, and muskrat. Recreational activities include boating, hunting, fishing, and swimming.

The following counties border on or have land within the Upper Mississippi River National Wildlife and Fish Refuge. In each state, the counties are listed from north to south. The lakes and rivers within the refuge area of each county are also listed. 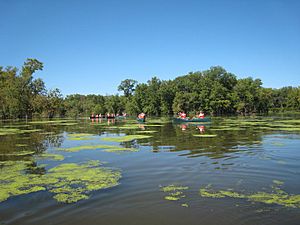 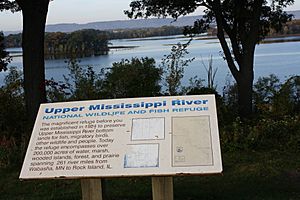 All content from Kiddle encyclopedia articles (including the article images and facts) can be freely used under Attribution-ShareAlike license, unless stated otherwise. Cite this article:
Upper Mississippi River National Wildlife and Fish Refuge Facts for Kids. Kiddle Encyclopedia.