Wabasha is a city in Wabasha County, Minnesota. The population was 2,521 at the time of the 2010 census. Located on the Mississippi River near its confluence with the Chippewa River, it is the county seat.

Wabasha is named after the Mdewakanton Dakota mixed-blood (with Anishinaabe) chiefs Wapi-sha, or red leaf (wáȟpe šá - leaf red), father (1718–1806), son (1768–1855), and grandson (±1816-1876) of the same name. The second, Wabishaw the son, signed the 1830 USA treaty with the "Confederated Tribes of the Sacs and Foxes; the Medawah-Kanton, Wahpacoota, Wahpeton and Sissetong Bands or Tribes of Sioux; the Omahas, Ioways, Ottoes and Missourias" in Prairie du Chien. The grandson, Wabasha III (±1816-1876), signed the 1851 and 1858 treaties that ceded the southern half of what is now the state of Minnesota to the United States, beginning the removal of his band to the Minnesota River, then removal from Minnesota to Crow Creek Reservation in Dakota Territory, then lastly to the Santee Reservation in Nebraska, where the last chief Wabasha died.

The city of Wabasha is located on the Mississippi River at the foot of Lake Pepin. 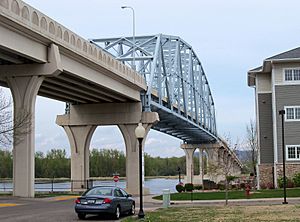 Wabasha Bridge over the Mississippi River

The Köppen Climate Classification subtype for this climate is "Dfb"(Warm Summer Continental Climate).

There were 1,144 households, of which 23.1% had children under the age of 18 living with them, 44.2% were married couples living together, 9.4% had a female householder with no husband present, 3.5% had a male householder with no wife present, and 42.8% were non-families. 37.9% of all households were made up of individuals, and 17.1% had someone living alone who was 65 years of age or older. The average household size was 2.09 and the average family size was 2.72.

Wabasha is the location of the National Eagle Center. Wabasha is also home to the Grace Memorial Episcopal Church, the oldest Episcopal church in Minnesota, which features a Tiffany stained glass window. 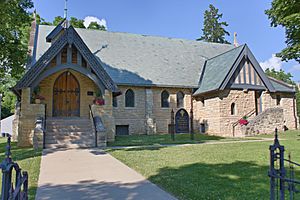 Upon entering Wabasha you will see a sign reading "Welcome to Wabasha, Home of Grumpy Old Men". This is a tribute to the 1993 film Grumpy Old Men and its 1995 sequel Grumpier Old Men, both of which use the city as a setting. Though many of the places mentioned in the films (such as the local VFW and Slippery's Tavern) can be found in Wabasha, most location shots actually were filmed in other Minnesota communities. The only scene filmed near Wabasha was the "snow angel" scene, filmed in nearby Red Wing.

All content from Kiddle encyclopedia articles (including the article images and facts) can be freely used under Attribution-ShareAlike license, unless stated otherwise. Cite this article:
Wabasha, Minnesota Facts for Kids. Kiddle Encyclopedia.