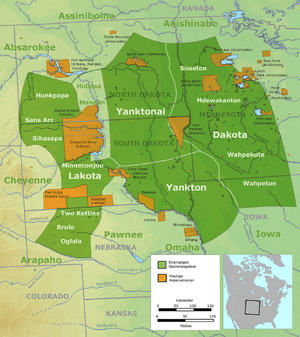 Traditional location of Sioux tribes prior to 1770 (dark green) and their current reservations (orange). The Santee reservation, on north edge of Nebraska, is labeled "Dakota"

The Santee Sioux Reservation of the Santee Sioux (also known as the Eastern Dakota) was established in 1863 in present-day Nebraska. The tribal seat of government is located in Niobrara, Nebraska, with reservation lands in Knox County.

The reservation (shown as Dakota Reservation on the map at right) lies along the south bank of the Missouri River, and includes part of Lewis and Clark Lake. As of the 2000 census, the reservation recorded a resident population of 878, of which 64.1% were Native American and 33.7% White. Its land area is 172.99 mi.² (447.84 km²). The major center of population is the village of Santee, in the northernmost portion of the reservation.

Other major populations of Oglala Lakota and Brulé Sioux are located to the north on reservations within South Dakota.

All content from Kiddle encyclopedia articles (including the article images and facts) can be freely used under Attribution-ShareAlike license, unless stated otherwise. Cite this article:
Santee Sioux Reservation Facts for Kids. Kiddle Encyclopedia.