Grant County is a county located in the U.S. state of Wisconsin. As of the 2010 census, the population was 51,208. Its county seat is Lancaster.

Grant County comprises the Platteville, WI Micropolitan Statistical Area. It is in the tri-state area of Illinois, Iowa, and Wisconsin, and is crossed by travelers commuting to Madison from a number of eastern Iowan cities, and by residents of northern Illinois traveling to the Twin Cities or La Crosse, Wisconsin.

What is now Grant County was largely uninhabited prior to contact with Europeans, as it was a border region between the territories of the Kickapoo, Menominee, and Illinois tribes. The only Native American group to have a permanent settlement in the area was the Meskwaki, sometimes known as the Fox, who had a temporary village in what is now the extreme northeast of the county during the mid-1700s.

Between 1520 and 1620 this area was nominally ruled by Spain, though no Spaniard or anyone who claimed loyalty to Spain had ever come within five hundred miles of the region during this time, and as such, Spanish authority went completely unfelt in what is now Grant County, Wisconsin.

The first Frenchmen to reach what is now Grant County were Jacques Marquette and Louis Joliet who explored the region in the spring of 1673, when they set out from what would later become Green Bay. No permanent settlement was made. In 1680 Louis Hennepin also passed through the region that would later become Grant County, also making no permanent settlement. In 1689 Nicholas Perrot passed through the territory and claimed it for the King of France. The first known settlement by a European came in 1725 when a trading post was established by Pierriere Marin. Later the French would abandon it.

The British technically ruled the region during the period in between the French and Indian War and the American Revolution, though no effort was made to settle or administer the region which would eventually become Grant County. After the French abandoned the trading post established by Marin, the next person of European descent to see what is now Grant County was Captain Jonathan Carver, an English colonial from Connecticut who passed through what is now Grant County in 1776 during an attempt to discover the Pacific Ocean.

In 1783 the British government acknowledged the jurisdiction of the United States over the land east of the Mississippi River, including what is now Grant County. There were no permanent settlers of either European or Native American descent in what is now Grant County since the French trading post established by Marin was abandoned, both Native Americans of the region and the European and White American fur traders who passed through were nomadic, and left no records. Grant County was created as part of Wisconsin Territory in 1837. It was named after an Indian trader; his first name, origins, and eventual fate are all unknown. 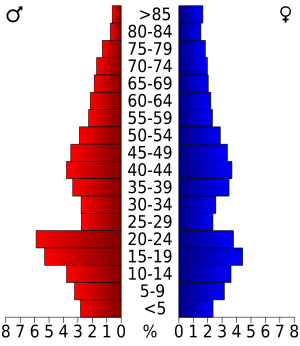 All content from Kiddle encyclopedia articles (including the article images and facts) can be freely used under Attribution-ShareAlike license, unless stated otherwise. Cite this article:
Grant County, Wisconsin Facts for Kids. Kiddle Encyclopedia.