Clayton County is a county located in the U.S. state of Iowa. As of the 2020 census, the population was 17,043. Its county seat is Elkader. The county was established in 1837 and was named in honor of John M. Clayton, United States Senator from Delaware and later Secretary of State under President Zachary Taylor. 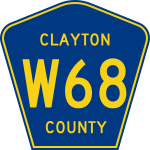 Clayton County is part of the Driftless Area, a region that completely missed being ice-covered during the last ice age. Streams have deeply carved valleys, while the Mississippi River has spectacular bluffs. 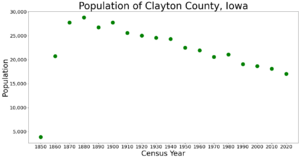 Population of Clayton County from US census data

Clayton County is divided into these townships:

The population ranking of the following table is based on the 2010 census of Clayton County.

All content from Kiddle encyclopedia articles (including the article images and facts) can be freely used under Attribution-ShareAlike license, unless stated otherwise. Cite this article:
Clayton County, Iowa Facts for Kids. Kiddle Encyclopedia.