Winneshiek County is a county located in the U.S. state of Iowa. As of the 2020 census, the population was 20,070. The county seat is Decorah.

A largely rural and agricultural county, Winneshiek County has a rich cultural history from Czech, Slovak, English, Irish, German, Swiss, and Norwegian immigrants that have settled within its boundaries.

The county was originally settled in 1848 in present-day Bloomfield Township (near Castalia, Iowa) and in Washington Township (near Fort Atkinson, Iowa). It was organized in 1847, and named after a chief of the Winnebago tribe.

In 1980, Winneshiek County reported a population of 21,842. Like much of Iowa during the 1980s it witnessed a population loss, plummeting to 20,847 according to the 1990 United States Census. However, during the 1990s the county experienced some mild growth and was able to rise above the 21,000 mark once again.And as of year of 2010,they have a total of 785 employees and staff. 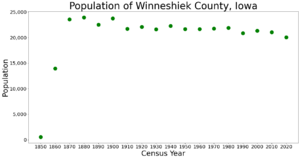 Population of Winneshiek County from US census data

The population ranking of the following table is based on the 2010 census of Winneshiek County.

The following school districts have their administrative headquarters in the county:

North Winneshiek Community School District was in the county until it merged with Decorah CSD on July 1, 2018.

The following school districts have their administrative headquarters outside of the county but serve sections of Winneshiek County:

All content from Kiddle encyclopedia articles (including the article images and facts) can be freely used under Attribution-ShareAlike license, unless stated otherwise. Cite this article:
Winneshiek County, Iowa Facts for Kids. Kiddle Encyclopedia.