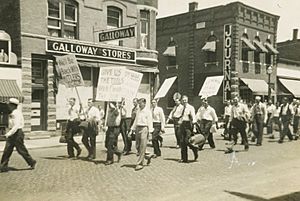 Decorah is a city in and the county seat of Winneshiek County, Iowa, United States. The population was 7,587 at the time of the 2020 census. Decorah is located at the intersection of State Highway 9 and U.S. Route 52, and is the largest community in Winneshiek County.

Decorah was the site of a Ho-Chunk village beginning around 1840. Several Ho-Chunks had settled along the Upper Iowa River that year when the United States Army forced them to remove from Wisconsin. In 1848, the United States removed the Ho-Chunks again to a new reservation in Minnesota, opening their Iowa villages to white settlers. The first whites to settle were the Day family from Tazewell County, Virginia. According to local Congregationalist minister Rev. Ephraim Adams, the Days arrived in June 1849 with the Ho-Chunks' "tents still standing—with the graves of the dead scattered about where now run our streets and stand our dwellings." Judge Eliphalet Price suggested that the Days name their new settlement Decorah after Ho-Chunk leader Waukon Decorah, who was a U.S. ally during the Black Hawk War of 1832.

During the 1850s and 1860s, Decorah grew quickly as settlers built dams and mills to harness water power at Dunning's Spring and other local streams. In 1851, the town became the county seat of Winneshiek County. Decorah also became the site of a U.S. Land Office from 1855 to 1856, making it a destination for immigrants seeking land patents in northern Iowa. The Milwaukee and St. Paul Railroad opened a branch to Decorah in 1869. 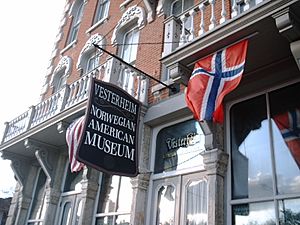 Decorah has become a center for Norwegian-American culture originating from a high number of Norwegian settlements beginning in the 1850s. Since 1861 it has been the home of Luther College, a liberal arts institution affiliated with the Evangelical Lutheran Church in America. Each July Decorah is also the host of Nordic Fest, a celebration of Norwegian culture with ethnic dancing, food, and music. Decorah is also the home of the Vesterheim Norwegian-American Museum, the largest museum in the country devoted to one single immigrant group. Until 1972, one of the largest Norwegian language newspapers in the nation was published in Decorah, the Decorah Posten.

About 470 million years ago, an asteroid as big as a city block smashed into what is now Decorah, supporting a theory that a giant space rock broke up and bombarded Earth just as early life began flourishing in the oceans.

The impact dug a crater nearly four miles wide that now lies beneath the town, said Bevan French, one of the world’s foremost crater hunters and an adjunct scientist at the National Museum of Natural History.

The Decorah crater lay undiscovered until recently because almost none of it is above ground. Instead, it is filled by an unusual shale that formed after an ancient seaway sluiced into the crater, depositing sediment and an array of bizarre sea creatures that hardened into fossils. One such creature is Pentecopterus decorahensis, which was named for the city. 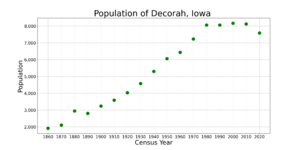 The population of Decorah, Iowa from US census data

There were 2,855 households, of which 21.9% had children under the age of 18 living with them, 44.4% were married couples living together, 6.8% had a female householder with no husband present, 2.3% had a male householder with no wife present, and 46.5% were non-families. 38.5% of all households were made up of individuals, and 18.7% had someone living alone who was 65 years of age or older. The average household size was 2.09 and the average family size was 2.76.

Each July Decorah is the home of Nordic Fest, a celebration of Norwegian culture. Decorah is also the home of the Vesterheim Norwegian-American Museum. This museum is the largest Norwegian museum in the United States.

Decorah is home to an operating trout hatchery as well as Twin Springs Park, the former home of the hatchery.

The Raptor Resource Center is located in Decorah. Each year they host a livestreamed webcam of a family of nesting bald eagles as they rear their young. 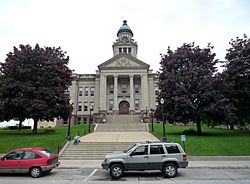 Decorah serves as the county seat of Winneshiek County, which is a major employer. The county courthouse was built in 1903. Decorah's largest employer is Luther College, in addition to several national corporations. Because Winneshiek County's economy is primarily based on farming, Decorah serves as an agricultural hub. Decorah is also home to Seed Savers Exchange, an heirloom plant farm and preservation organization.

Decorah is part of the Decorah Community School District in Winneshiek County. The high school is Decorah High School, and the mascot is the Vikings.

St. Benedict School of the Roman Catholic Archdiocese of Dubuque is in Decorah. It opened in 1885 in a two-story, four-room frame building. The school, with five nuns as teachers, was initially until high school but in 1919 became an elementary-middle school only. The convent, which had a second-floor bridge to the original school building, was renovated to be the second school building. In 1964 the current school was built for $268,000 in southern Decorah. A new addition was established in the 1980s, with a music room, a storage and teaching aid area, and two classrooms.

Decorah is also home to Luther College, a private four-year residential college affiliated with the Evangelical Lutheran Church in America and known especially for their Nordic Choir. Their mascot is "The Norse."

All content from Kiddle encyclopedia articles (including the article images and facts) can be freely used under Attribution-ShareAlike license, unless stated otherwise. Cite this article:
Decorah, Iowa Facts for Kids. Kiddle Encyclopedia.