The Decorah crater, also called the Decorah impact structure, is a possible impact crater located on the east side of the city of Decorah in Iowa, United States. It is thought to have been caused by a meteor about 200 metres (660 ft) wide which struck during the Middle Ordovician Period, circa 470 million years ago.

The crater is estimated to be 3.5 miles (5.6 km) in diameter, covered by the Winneshiek Shale. There is no surface evidence of the impact, as the Winneshiek Shale is more than 50 feet (15 m) below the bottom of the Upper Iowa River. The impact event, equivalent to 1,000 megatons of TNT, did not appear to penetrate the Earth's mantle, but it did push down the underlying Ordovician and Cambrian bedrock several hundred feet. It may be one of several Middle Ordovician meteors that fell roughly simultaneously 469 million years ago, part of a proposed Ordovician meteor event, including three confirmed impact craters: Rock Elm crater in Wisconsin, Slate Islands crater in Lake Superior, and Ames crater in Oklahoma.

The Middle Ordovician (Darriwilian) Winneshiek Lagerstätte sediments that filled in the crater contained a wide variety of unusual fauna. Among them was a newly discovered species of eurypterid, Pentecopterus decorahensis. Pentecopterus was scorpion-like in appearance, and the largest predator known from that time, measuring nearly 6 feet in length. Its species name was derived from "Decorah." 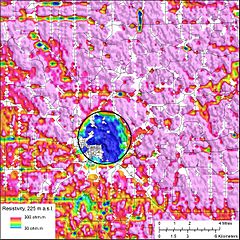 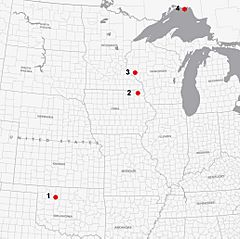 All content from Kiddle encyclopedia articles (including the article images and facts) can be freely used under Attribution-ShareAlike license, unless stated otherwise. Cite this article:
Decorah crater Facts for Kids. Kiddle Encyclopedia.