Allamakee County (pronounced AL-uh-muh-KEY) is the northeastern-most county in the U.S. state of Iowa. As of the 2010 census, the population was 14,330. Its county seat is Waukon. 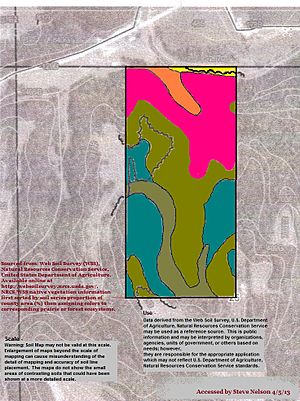 In the northern part of the county is the Upper Iowa River. In the southern part is the Yellow River. The eastern boundary is the Mississippi River. All offer scenic and recreational opportunities, particularly in Yellow River State Forest.

French Creek flows north of Waukon, outside the city limits. Paint Creek, named after Paint Rock Bluff, flows out of the south of Waukon. Norfolk creek originates in the western outskirts of Waukon and is effluent to the Yellow River. Clear Creek flows into Lansing. Village Creek flows through essentially rural terrain. All are tributary to the Mississippi River.

The landforms encountered in the county are very unlike those found in most of Iowa, which is mostly absent Glacial Drift. As part of the Driftless Area, the county was ice free during the last ice age, and as one progresses to the Mississippi River, the streams and rivers display high-walled canyons carved of Silurian period bedrock. This Driftless Area also includes parts of Clayton, Fayette, Winneshiek, Howard, Dubuque, and Jackson Counties. 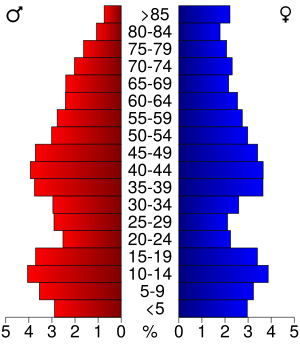 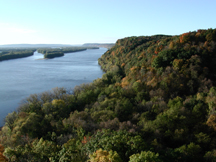 View of the Mississippi from Effigy Mounds National Monument

The population ranking of the following table is based on the 2010 census of Allamakee County.

All content from Kiddle encyclopedia articles (including the article images and facts) can be freely used under Attribution-ShareAlike license, unless stated otherwise. Cite this article:
Allamakee County, Iowa Facts for Kids. Kiddle Encyclopedia.