Lansing is a city in Lansing Township, Allamakee County, Iowa, United States. The population was 968 at the time of the 2020 census. 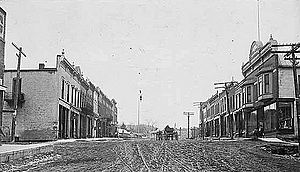 Lansing was platted about 1851. The city was so named because the first settler was a native of Lansing, Michigan.

Mount Hosmer is located on the north end of Lansing. 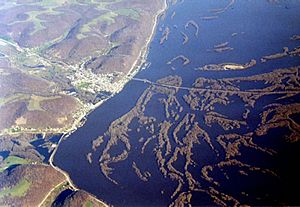 There were 451 households, of which 22.6% had children under the age of 18 living with them, 45.5% were married couples living together, 7.5% had a female householder with no husband present, 4.0% had a male householder with no wife present, and 43.0% were non-families. 37.5% of all households were made up of individuals, and 16.4% had someone living alone who was 65 years of age or older. The average household size was 2.10 and the average family size was 2.74. 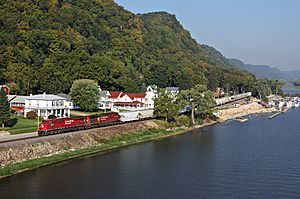 Lansing across the Mississippi River

Lansing is served by Iowa Highway 9, which terminates on the Black Hawk Bridge leading to Wisconsin.

Lansing is a river town, right on the main channel of the Mississippi River, and consequently has a resort-like feel from the seasonal recreational boaters.

All content from Kiddle encyclopedia articles (including the article images and facts) can be freely used under Attribution-ShareAlike license, unless stated otherwise. Cite this article:
Lansing, Iowa Facts for Kids. Kiddle Encyclopedia.