Houston County is a county in the U.S. state of Minnesota. At the 2020 United States Census, the population was 18,843. Its county seat is Caledonia.

Four years before Minnesota was admitted to the Union as the 32nd state on May 11, 1858, Houston County was chartered after its division from the eastern half of Fillmore County on April 4, 1854. The county seat was the village of Houston for a few years, but the county board moved the official records to Caledonia for safe storage in the cabin of Commissioner Samuel McPhail. The first court hearings were held in that cabin, and a one-story courthouse and jail was built in Caledonia in 1857. Turmoil over the county seat continued, a two-story building was built in Caledonia in 1867, and several referenda allowed Caledonia to prevail as the county seat by 1874. From that point on, Caledonia prospered, and Houston slowly diminished. The only other area of prominence was La Crescent, which benefited from its connection to La Crosse, Wisconsin.

The county name was chosen to honor Sam Houston, who was president of Texas before its annexation by the United States and afterward was a senator from that state. In the years 1854-56, when antagonism between the North and South on slavery questions would lead eventually to the Civil War, Houston aspired to nomination as the Democratic candidate for the national presidency. In October 1854, the general Democratic committee of New Hampshire recommended him as "the people's candidate" for the campaign in 1856. His popularity in Minnesota at that time recommended the name of this county, and, likewise, counties in Tennessee and Texas and cities and villages in Texas, Mississippi, Missouri, and other states bear his name.

Among other parts of southeastern Minnesota, the county is in the Driftless Zone, marked by the absence of glacial drift and presence of bedrock cut by streams into steep hills. The plateau that surrounds Caledonia, the county seat, includes flat, fertile farm land and hilly, verdant pasture land. 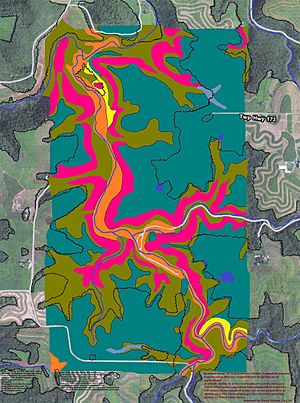 The following lakes are located within the Upper Mississippi River National Wildlife and Fish Refuge.

All content from Kiddle encyclopedia articles (including the article images and facts) can be freely used under Attribution-ShareAlike license, unless stated otherwise. Cite this article:
Houston County, Minnesota Facts for Kids. Kiddle Encyclopedia.