Winona County is a county located in the U.S. state of Minnesota. As of the 2010 census, the population was 51,461. Its county seat is Winona.

The name of the county is said to derive from a Dakota legend regarding a woman, referred to as Winona, who was betrothed to marry a warrior whom she did not love. Rather than marry him, she is said to have leapt to her death from a rock now called "Maiden's Rock" on Lake Pepin. This legend is colloquially referred to as the Winona legend. 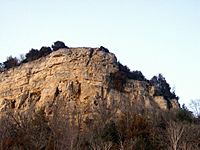 Maiden Rock, from which legend has it the Dakota maiden named Winona leapt to her death. 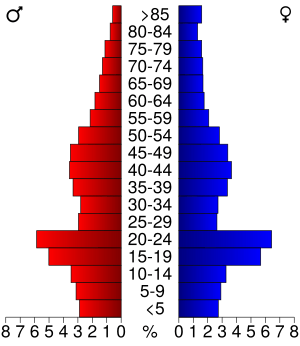 In 2016, Winona county planning commissioners voted to approve new permits for existing commercial dog breeding operations, also known as "puppy mills", despite overwhelming evidence of animal cruelty and neglect. Due to the high number of kennels in the county, Winona county has earned the dubious title "Puppy Mill Capital of Minnesota".

See also: List of metropolitan areas of the United States

All content from Kiddle encyclopedia articles (including the article images and facts) can be freely used under Attribution-ShareAlike license, unless stated otherwise. Cite this article:
Winona County, Minnesota Facts for Kids. Kiddle Encyclopedia.