Waukon is a city in Makee Township, Allamakee County, Iowa, United States, and the county seat of Allamakee County. The population was 3,827 at the time of the 2020 census.

Waukon is often said to be named for Waukon Decorah, a Ho Chunk (Winnebago) leader who was a U.S. ally during the 1832 Black Hawk War, although the city is also said to be named for his son Chief John Waukon. Winnebagos lived in this area of Iowa in the 1840s, before being forced to relocate to Minnesota.

The first white settler arrived in 1849, and the town was founded and the Waukon Post Office opened in 1853. A court house was completed in 1861, and the county seat was moved to Waukon in 1867 after 8 elections attempting to decide the location of the county seat. The town was incorporated in 1883.

Waukon is only about 16 miles from Waukon Junction, on the Mississippi River, but the rail line between these two points was 33 miles long, climbing 600 feet through some of the roughest terrain in Iowa. The Waukon and Mississippi Railroad, which opened in 1877, was originally built as a narrow gauge line. The line was originally controlled by the Chicago and Northwestern but was quickly acquired by the Chicago, Milwaukee and St. Paul Railway. The line was widened to standard gauge after purchase by the Milwaukee Road. Its only marginal traffic through its existence led to the road's abandonment in the late 1960s. 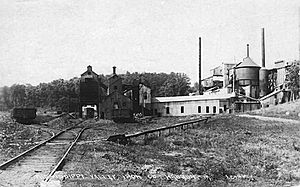 There is a deposit of limonite (Iron Ore) about 3 miles northeast of Waukon called Iron Hill, holding an estimated 10 million tons of ore. This is the highest point in northeastern Iowa. the Waukon Iron Company began developing an open-pit mine and ore-washing plant on this site in 1899, with a capacity of 300 tons per 10-hour shift. Production was seriously limited by the need to haul the ore 3 miles to the railroad, and the mine was, ultimately, a failure.

A second and better capitalised attempt to mine this deposit was begun in 1907 by the Missouri Iron Company, with a railroad connection built in 1910 and a new ore processing plant completed in 1913 with a capacity of 350 to 400 tons per day. The total investment was estimated at $225,000, and two patents were issued for the machinery in the ore processing plant. This mine became the principal mine of the new Mississippi Valley Iron Company of St. Louis, Missouri in 1916.

According to the United States Census Bureau, the city has a total area of 2.82 square miles (7.30 km2), all of it land.

There were 1,781 households, of which 24.3% had children under the age of 18 living with them, 43.0% were married couples living together, 9.4% had a female householder with no husband present, 4.2% had a male householder with no wife present, and 43.4% were non-families. 37.5% of all households were made up of individuals, and 18% had someone living alone who was 65 years of age or older. The average household size was 2.11 and the average family size was 2.77.

Waukon Family Aquatic Area: The aquatic pool is the main attraction in Waukon's park. Also in the park is a small area with a lake, as well as some playgrounds. The park also includes some softball/athletic fields.

All content from Kiddle encyclopedia articles (including the article images and facts) can be freely used under Attribution-ShareAlike license, unless stated otherwise. Cite this article:
Waukon, Iowa Facts for Kids. Kiddle Encyclopedia.