McGregor is a city in Clayton County, Iowa, United States. The population was 742 at the time of the 2020 census. McGregor is located on the Mississippi River across from Prairie du Chien, Wisconsin. Pike's Peak State Park is located just south of the city. Just to the north of McGregor is the city of Marquette. The community of McGregor Heights lies in the southern parts of the city limits. 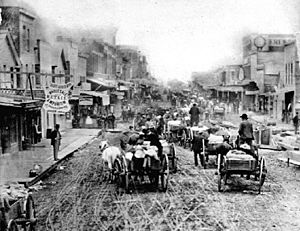 McGregor was founded as MacGregor's Landing in 1847 by Alexandar MacGregor, a descendant of Rob Roy MacGregor, and the area around MacGregor's Landing was settled by the extended family. In 1849 it was reported that the original MacGregor seal and signet were owned by Alex MacGregor. The Scots Gaelic clan seal was inscribed, "S' Riogal Mo Dhream/ Een dhn bait spair nocht", which was interpreted as "Royalty is my race / End do and spare not". The signet was a bloodstone from Loch Lomond, and was sketched by William Williams.

Since 1837, MacGregor had been operating a ferry across the Mississippi River between Prairie du Chien, Wisconsin and the present site of McGregor, Iowa. MacGregor planned the new city as a six block development, and it was quickly populated, being incorporated as McGregor in 1857. In that same year, the Milwaukee & Mississippi Railroad finished building a railroad track from Milwaukee, Wisconsin to Prairie du Chien, Wisconsin, thus connecting Lake Michigan with the Mississippi River by rail. McGregor quickly became a major commercial center, and served as a hub where grain from Iowa and Minnesota could be transported across the Mississippi and sent on to Milwaukee via railroad. More railroads were built to connect McGregor with cities further west, and the city of North McGregor (now Marquette, Iowa) was established just north of the city to serve as the city's railroad terminus. After reaching McGregor from the west, trains were disassembled and railroad cars were ferried across the Mississippi to continue on towards Lake Michigan.

During the 1870s, the population of McGregor exploded to over 5,500 as the city became the busiest shipping port west of Chicago. In 1874, the system of ferrying railroad cars across the river between North McGregor and Prairie du Chien, Wisconsin, was brought to an end when Prairie du Chien businessman John Lawler commissioned the construction of a permanent pontoon bridge to connect the two cities' rail lines. As the need for men to disassemble and ship trains across the river disappeared, the city's population began to decline. Today the city's history is preserved in its downtown business district, which contains many buildings constructed during the city's boom years. Because of its colorful history and location beside the Mississippi River, the city has become a popular summer tourist destination, and it is known for its many antique stores.

According to the United States Census Bureau, the city has a total area of 1.30 square miles (3.37 km2), all of it land.

There were 410 households, of which 20.0% had children under the age of 18 living with them, 39.8% were married couples living together, 11.7% had a female householder with no husband present, 3.4% had a male householder with no wife present, and 45.1% were non-families. 39.0% of all households were made up of individuals, and 16.4% had someone living alone who was 65 years of age or older. The average household size was 2.02 and the average family size was 2.66.

It is within the MFL MarMac Community School District. The district formed on July 1, 1994 with the merger of the Mar-Mac and M-F-L districts.

All content from Kiddle encyclopedia articles (including the article images and facts) can be freely used under Attribution-ShareAlike license, unless stated otherwise. Cite this article:
McGregor, Iowa Facts for Kids. Kiddle Encyclopedia.