The city is named after Algerian leader Abd al-Qadir al-Jaza'iri. When the community was platted in 1846, the founders, Timothy Davis, John Thompson, and Chester Sage decided to name it for the young Algerian who was leading his people in resisting the French colonial takeover of Algeria. 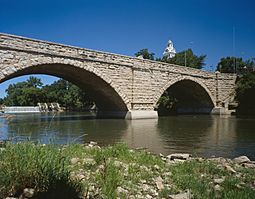 Elkader Keystone Bridge is listed on the NRHP

The town is known for its bridge over the Turkey River, said to be the largest stone arch bridge west of the Mississippi. It, and many of the local buildings, are made from locally quarried sandstone. The town's grocery store, Wilke's, is the oldest continuously operated grocery store west of the Mississippi, as well. Elkader also features a renovated Victorian-era opera house, and the Turkey River Mall, a 29-room hotel converted into antique stores.

The town featured in a WAMU World View documentary; "Couscous and cultural diplomacy". It is a documentary which focuses on an openly gay couple, who settled in Elkader, and opened an Algerian-American restaurant. One of the couple is Algerian. The documentary describes how the couple have largely been accepted as part of the community yet wrestle with cultural adaptation, American identity, and small town politics, as well as many of the personal issues they experienced post 9/11.

The city was one of many in Iowa affected by the Iowa Flood of 2008, with flood waters from the Turkey River reaching historic levels. 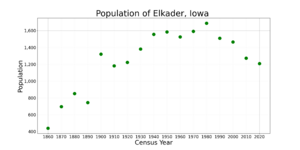 The population of Elkader, Iowa from US census data

Elkader has one sister city, as designated by Sister Cities International:

The municipality is within the boundary of the Central Community School District.

All content from Kiddle encyclopedia articles (including the article images and facts) can be freely used under Attribution-ShareAlike license, unless stated otherwise. Cite this article:
Elkader, Iowa Facts for Kids. Kiddle Encyclopedia.