Buchanan County is a county located in the U.S. state of Iowa. As of the 2020 census, the population was 20,565. Its county seat is Independence. The county was created in 1837 and was named in honor of Senator James Buchanan, the 15th President of the United States.

Buchanan County was formed on December 21, 1837 from parts of Dubuque County. It was named after future US president James Buchanan. 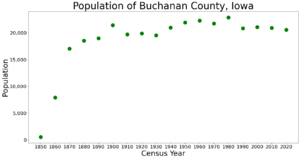 Population of Buchanan County from US census data 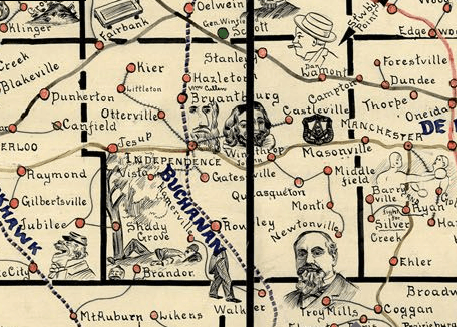 This detail of Galbraith's 1897 Rail Service Map of Iowa shows Buchanan County towns of the time. It is a pictorial map rather than a technical map: Shady Grove, for example, is shown next to a man lying under a tree; Masonville is shown next to a Masonic symbol. Some of the towns' locations are slightly altered to make room for the illustrations. Several of these towns, including Hamerville, Vista, Kier, Middlefield, Newtonville, and Castleville no longer exist. A few are nearly ghost towns.

A number of historic communities in Buchanan County once appeared on state maps, but no longer exist. Hamerville was located east of Brandon at the intersection of Highway 150. Today, the site is the location of three farmhouses. Vista, once located between Brandon and Independence, appeared on maps frequently until the 1950s. This site is not even accessed by paved road. Kier, between Fairbank and Littleton, appeared on many maps in the 19th century and early 20th century. The area is now settled by Amish. Several towns named Middlefield existed southeast of Winthrop, but none are populated today. Newtonville was located a few miles south of Monti. The houses at Castleville were later moved to Aurora. Wise, once located between Independence and Jesup just north of Highway 939, was a train-stop between the 1920s and the 1950s. Little remains at the site. Kiene was founded in 1911 between Quasqueton and Monti, but was empty by 1955. Few or even no houses remain at any of these sites.

The population ranking of the following table is based on the 2010 census of Buchanan County.

Buchanan County is home to the Hazleton Old Order Amish settlement, founded in 1914, that in 1987 had to six church districts (congregations) with an estimated population of about 1,200 Amish. The Buchanan Amish affiliation is named after Buchanan County.

All content from Kiddle encyclopedia articles (including the article images and facts) can be freely used under Attribution-ShareAlike license, unless stated otherwise. Cite this article:
Buchanan County, Iowa Facts for Kids. Kiddle Encyclopedia.