Kids Encyclopedia Facts
This page is about the city. For the adjacent town, see Platteville (town), Wisconsin.

Platteville is the largest city in Grant County in southwestern Wisconsin. The population was 11,224 at the 2010 census, growing 12% since the 2000 Census. Much of this growth is likely due to the enrollment increase of the University of Wisconsin–Platteville. It is the principal city of the Platteville Micropolitan Statistical area which has an estimated population of 49,681.

Platteville was a small farming and fur trading community along the Platte River, from which the town got its name. In the 1820s, lead ore or Galena was discovered in the area, a mining boom took the area by storm. The mining district encompassed a significant portion of southwest Wisconsin. More specifically, the counties of Grant, Iowa, Lafayette, and Jo Davies County (Illinois) played a major role in the mining of lead and zinc ore. The Galena, Illinois mining district, an area south of Platteville, had been known to many for years. Beginning in 1825, lead prices saw a dramatic boost and the Platteville economy flourished. The "grey gold" (a common nickname for lead ore) was brought development of businesses and schools. Platteville's landscape was shaped by the mining that helped build the town, and mineral holes abounded everywhere.

By the 1849s lead ore production was decreasing. However, the mining of zinc ore quickly filled the void for prospective work. Platteville was now an established town, complete with schools, an academy, newspaper, several churches, and a telegraph service as of November 1849."

During this time, a teachers' college and a mining college were founded. The Normal School was established on October 9, 1866. The Wisconsin Mining Trade School opened in January 1908. In 1959, these two colleges merged to become Wisconsin State College and Institute of Technology. It was not until 1971 that the college became University of Wisconsin–Platteville, a school that specializes in engineering. Nowadays, UW Platteville is also considered the best criminal justice college in the mid-west. 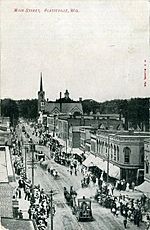 Today, Platteville is mainly a college town, with some development in the white-collar sector. That growth is a result of the increasing number of engineering firms locating in Platteville to take advantage of UW-P's engineering program.

From 1984 until 2001 the Chicago Bears football team held training camp on the campus of University of Wisconsin–Platteville. This resulted in a substantial infusion of money into the local economy each summer. That money stopped flowing after the Bears decided to hold training camp at Olivet Nazarene University in Illinois.

In 2004, U.S. Highway 151 was upgraded to a limited-access highway whose lanes run further south of Platteville, bypassing the city. Prior to the upgrade, the highway exits were closer to Platteville and Platteville has already made changes to adjust to the new southern US 151 bypass. A new hospital was built just north of US 151 and next to its off ramps. A Walmart Supercenter and a Menards have opened near the northern end of the US 151 bypass. 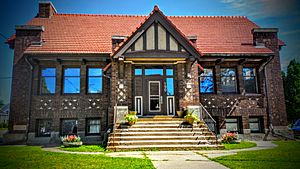 Platteville is serviced by Wisconsin State Highways 80 and 81, as well as U.S. Highway 151. Originally, U.S. 151 went through the valley that made up the southern border of the city limits, but with the completion of the four-lane limited-access superhighway, traffic has been rerouted and now loops south of the city.

The minerals in the area consist of galena, a sulfide of lead (lead 86.6, sulfur 13.4). Sphalerite or zinc sulfide is also, common in the region. Zinc and lead mining were in heavy production through the 1820s – 1920s. Consequently, there are few straight streets in Platteville. As a result of the mining in the 1800s, a honeycomb of abandoned old mines, streets were located to avoid the mines.

There were 3,644 households of which 18.2% had children under the age of 18 living with them, 32.7% were married couples living together, 7.8% had a female householder with no husband present, 3.3% had a male householder with no wife present, and 56.1% were non-families. 31.4% of all households were made up of individuals and 11.6% had someone living alone who was 65 years of age or older. The average household size was 2.32 and the average family size was 2.80. 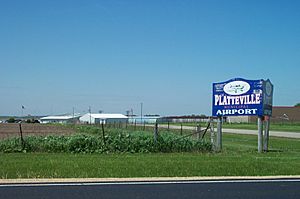 The main source of culture in Platteville is the Center for the Arts on University of Wisconsin–Platteville campus, which sponsors a steady stream of well-attended professional touring events.

The "Heartland Festival", a semi-professional theater festival that produced four shows that run throughout the summer, was a summer attraction featured at the UWP-Center for the Arts. The casts were a combination of professionals and local residents. 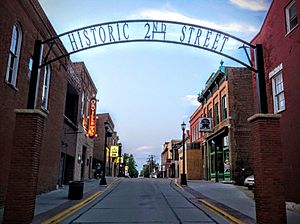 At the museums one can tour Lorenzo Bevan's 1845 lead mine, ride a 1931 zinc mine train, and view many exhibits on Platteville's mining history as well as Rollo Jamison's personal collection of artifacts.

Built in 1837 by the Rev. Samuel Mitchell, this home still contains many of the original furnishings. The home was a home of the Major John Rountree, one of Platteville's founders. The walls are two feet thick and made of dolomite Galena limestone. 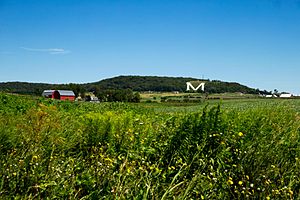 Platteville has the world's largest M, a claim that its Chamber of Commerce states is unchallenged. The M is a monogram for the former Wisconsin Mining School (now the University of Wisconsin–Platteville).

The first M was first constructed in 1936 when two men, Raymond Medley and Alvin Knoerr climbed the Platte Mound and trudged through 2 feet of snow to form a huge letter M. Actual construction of the stone M began in the spring of 1937 and was completed in the fall of the same year.

The M is composed of rocks laid on Platte Mound and is whitewashed (not painted) every year. The M is 241-feet tall, 214-feet wide and legs that are 25-feet wide.

The M can be seen many places in Platteville and sometimes in Iowa, on a clear day. Atop the Platte Mound and the M viewers can see three states: Wisconsin, Iowa, and Illinois.

The M is lit once a year during the University of Wisconsin – Platteville college homecoming. It is an attraction Platteville citizens generally appreciate.

All content from Kiddle encyclopedia articles (including the article images and facts) can be freely used under Attribution-ShareAlike license, unless stated otherwise. Cite this article:
Platteville, Wisconsin Facts for Kids. Kiddle Encyclopedia.