Kids Encyclopedia Facts
This page is about the city. For the adjacent town, see Boscobel (town), Wisconsin. 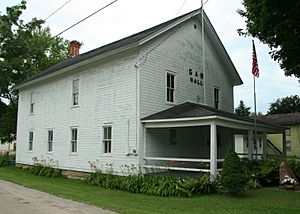 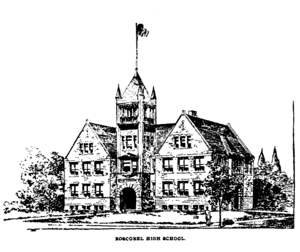 Boscobel High School as of 1900

Boscobel is a city in Grant County, Wisconsin, United States. The population was 3,231 at the 2010 census. Approximately 0.6 mi. (1 km) to the north of the city, across a riparian swamp, is the Wisconsin River. U.S. Route 61 crosses the Wisconsin River at Boscobel. To the south, the city is bordered by the Town of Boscobel.

Boscobel was the site of a stop along the now defunct Milwaukee Road, and it is still served by the Wisconsin and Southern Railroad. It is also the site of the Wisconsin Secure Program Facility (WSPF), a Wisconsin Department of Corrections prison for men. Businesses include the historic Central House Hotel, the birthplace of Gideons International.

Boscobel calls itself the "wild turkey hunting capital of Wisconsin".

On August 7, 2021, the southern edge of Boscobel was hit by what would eventually become the strongest tornado in Wisconsin in more than a decade, reaching EF3 strength just east of the city.

All content from Kiddle encyclopedia articles (including the article images and facts) can be freely used under Attribution-ShareAlike license, unless stated otherwise. Cite this article:
Boscobel, Wisconsin Facts for Kids. Kiddle Encyclopedia.