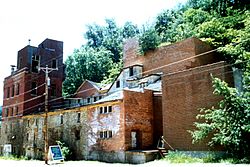 The Potosi Brewery, a landmark at the west end of the village, operated continuously from 1852 to 1972.

Potosi is a village in Grant County, Wisconsin, United States. The population was 688 at the 2010 census. The village is in the Town of Potosi.

Potosi is located where Wisconsin's lead ore belt intersects with the Mississippi. The post office (1837 to present) was originally located between Van Buren and Head of the Hollow, then at Van Buren, then at La Fayette. In 1839, the leaders of three settlements (Snake Hollow, sometimes called Head of the Hollow, Van Buren, and La Fayette) decided to combine the villages. The new, larger community was named Potosi, and the post office moved one last time, to the center of the new, merged community.

There are several explanations for the origin of the name Potosi, but the correct one is unknown. Many mining towns are named Potosi]</ref> Another explanation is that Potosi is a corruption of "Potosa," the supposed name of the wife of Julien Dubuque, an early settler in the area. No evidence exists for this theory.

Potosi was the home of the Potosi Brewing Company, makers of "Good Old Potosi Beer," from 1852 to 1972. A brewery restoration project has begun to preserve the history and tradition of the company. The National Brewery Museum opened inside the premises of the brewery in 2008. Potosi Brewery crafts and distributes a variety of beers throughout the region. Potosi Brewery's mission is to channel all profits into its markets served to support historical and educational initiatives, and charitable causes.

There were 295 households, of which 26.8% had children under the age of 18 living with them, 55.3% were married couples living together, 10.5% had a female householder with no husband present, 3.1% had a male householder with no wife present, and 31.2% were non-families. 27.1% of all households were made up of individuals, and 12.5% had someone living alone who was 65 years of age or older. The average household size was 2.33 and the average family size was 2.79.

Known as "the Catfish Capital of Wisconsin," the village holds an annual Catfish Festival and Fireman's Fish Fry, typically on the 2nd weekend of August. The event includes a truck and tractor pull, beanbag and a euchre tournament, fireworks, live music, a parade, and the fish fry. The National Brewery Museum and Library opened in the village on the site of the Potosi Brewery in 2008. The museum features historic beer and brewing memorabilia, including signs, advertisements, bottles, cans, and miscellaneous paraphernalia.

Local road signs herald Potosi's Main Street as "the longest Main Street in the world." A newspaper article traces the claim to a 1950s item in Ripley's Believe It Or Not which made the more qualified statement that it is the longest Main Street without a cross street. Current maps show a three-mile stretch, with numerous streets—including one named "Cross Street"—that drain into it and end, forming T-shaped intersections, but no street that continues across it. The stretch is divided into two portions each with a distinct street name: North Main Street and South Main Street.

All content from Kiddle encyclopedia articles (including the article images and facts) can be freely used under Attribution-ShareAlike license, unless stated otherwise. Cite this article:
Potosi, Wisconsin Facts for Kids. Kiddle Encyclopedia.