Potosi is a city in Washington County, Missouri, United States. Potosi is seventy-two miles southwest of St. Louis. The population was 2,660 at the 2010 census. It is the county seat of Washington County. The city was founded sometime between 1760 and 1780 as "Mine à Breton" or Mine au Breton, and later renamed by Moses Austin for the Bolivian silver-mining city of Potosí. 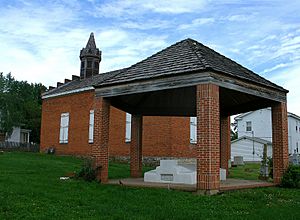 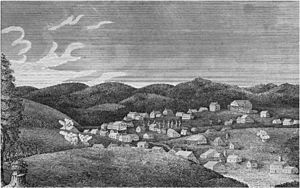 A view of Potosi published in 1819 by H.R. Schoolcraft, captioned Potosi, alias Mine á Burton

A lead mining settlement at this spot, "Mine à Breton" or Mine au Breton, was founded between 1760 and 1780 by Francis Azor, of Brittany, France. Moses Austin came here in 1798 with his family, including his son Stephen F. Austin. Moses obtained a grant of 7,153 arpents of land from the Spanish Empire and started large-scale mining operations, building his town to support it. Moses named the town after Potosí in Bolivia, which was famous for its vast silver mines. Austin's tomb and the foundation of his home Durham Hall can still be seen. Another mining entrepreneur in Potosi at the time of Moses Austin was James Bryan. Firmin Rene Desloge, who emigrated from Nantes, France in 1822 as the progenitor of the Desloge Family in America, located in Potosi and established a mercantile, distillery, fur trading and lead smelting business. The Desloge lead mining business Desloge Lead Company and later Desloge Consolidated Lead Company was later relocated to Bonne Terre, MO and also Desloge, MO by his son Firmin V. Desloge.

Potosi was designated county seat in 1814.

Woodcut artist Tom Huck grew up in Potosi, where he has taken inspiration from many of the region's local legends and folk tales. In 1998, Huck released "2 Weeks in August: 14 Rural Absurdities", a suite of 14 woodcut prints based on bizarre tales from the town's history.

Public education in Potosi is administered by the Potosi R-III School District.

Potosi has a public library, the Washington County Library.

All content from Kiddle encyclopedia articles (including the article images and facts) can be freely used under Attribution-ShareAlike license, unless stated otherwise. Cite this article:
Potosi, Missouri Facts for Kids. Kiddle Encyclopedia.