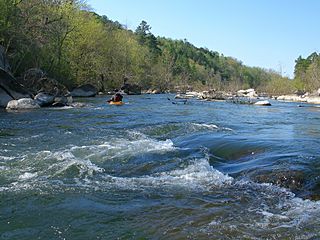 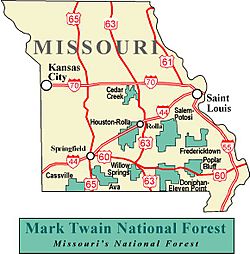 Mark Twain National Forest (MTNF) is a US National Forest. It is mainly in the southern half of Missouri. The MTNF was established on September 11, 1939. It is named for author Mark Twain, a Missouri native. The MTNF covers 1,491,840 acres (6,037.3 km2), 78,000 acres (320 km2) of which are wilderness, and National Wild and Scenic River area. MTNF spans 29 counties. It represents 11% of all forested land in Missouri. MTNF is divided into six distinct ranger districts: "Ava-Cassville-Willow Springs", "Eleven Point", "Houston-Rolla-Cedar Creek", "Poplar Bluff", "Potosi-Fredericktown", and the "Salem. The six ranger districts actually cover nine overall unique tracts of forests. The headquarters of the MTNF are in Rolla, Missouri.

Some unique features of the Mark Twain include Greer Spring. It is the largest spring on National Forest land. It is part of the Eleven Point National Scenic River. The spring pumps an average of 214 million gallons of water per day into the river. The public can also visit the Glade Top Trail National Scenic Byway, which offers views of over 30 miles (48 km) to the Boston Mountains in Arkansas. Part of the Ozark Trail system winds through the National Forest.

In the 1870s logging of the state's native oak, hickory, and pine forests began. Sawmills were common, but by the 1920s they had disappeared. By then so had much of the state's native forests. In 1939 President Franklin Delano Roosevelt signed the MTNF into existence. In March 1933, he also created the Civilian Conservation Corps (CCC). In the area that would later become Mark Twain National Forest, hundreds of young men at over fifty CCC sites worked at building roads and planting hundreds of acres of pine trees. Many of their contributions can still be visited and enjoyed today.

The Mark Twain is Missouri’s only national forest. It includes roughly 1.5 million acres, mostly within the Ozark Highlands. Located across southern Missouri and northern Arkansas, the Ozark Highlands are an ancient landscape. They have large permanent springs. The area has over 5,000 caves. It is made up of old volcanic mountains with many nationally recognized streams. Parts of the Ozarks were never under oceans or glaciers. There are over 750 miles of hiking trails. About 200 miles out of a planned 500 mile Ozark trail have been completed. When finished it will connect St. Louis to the border of Arkansas. There it will connect with the Ozark Highlands Trail in northwest Arkansas. When completed the trail will be over 1,000 miles long. It will run from St. Louis, Missouri to Lake Fort Smith State Park, near Fort Smith, Arkansas.

All content from Kiddle encyclopedia articles (including the article images and facts) can be freely used under Attribution-ShareAlike license, unless stated otherwise. Cite this article:
Mark Twain National Forest Facts for Kids. Kiddle Encyclopedia.