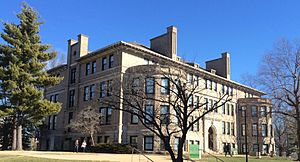 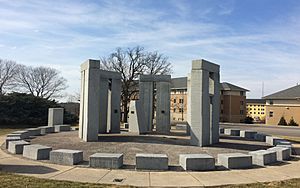 It is the home of the Missouri University of Science and Technology, well known, both nationally and internationally, for its many engineering departments and computer science department.

The headquarters of the Mark Twain National Forest is located in Rolla. The city is also within the Ozark Highlands American Viticultural Area, with vineyards established first by Italian immigrants to the area.

The first European-American settlers in Phelps County arrived in the early 19th century, working as farmers and iron workers along the local rivers, such as the Meramec, the Gasconade, and the Little Piney. In 1844, John Webber built the first house in what became the City of Rolla. Nine years later, railroad contractor Edmund Ward Bishop, considered to be the founder of Rolla, settled in the area. The state officially established Rolla as a town in 1858.

Two stories account for how Rolla was named. One story, widely regarded as a folk legend, and acknowledged as such by the Phelps County Historical Society, arises from the competition between Rolla and neighboring Dillon, Missouri, to be designated the county seat. When Rolla was made the county seat in 1861, the residents of Dillon, having lost a round, were allowed to choose the name of the new city and named it Rolla, after a good-for-nothing hunting dog.

The more widely accepted story came from a citizens' meeting about naming the town. Webber was said to prefer the name Hardscrabble (which was used to describe the soils in the region) and Bishop pushed for the name Phelps Center. New settlers from North Carolina voted to name the community after Raleigh their hometown but chose to spell the Missouri version phonetically.

With numerous settlers from the South, many residents of Rolla leaned toward the Confederacy during the American Civil War and the town was taken by Union forces in June 1861. They built two minor forts — Fort Wyman and Fort Dette — during their occupation. Rolla was also the location of Camp Glover and Camp Davies. From 1863 to 1865, Rolla was the regimental headquarters of the 5th Missouri State Militia.

For most of its history, Rolla has served as a transportation and trading center. It was the original terminus of the St. Louis-San Francisco Railway, colloquially known as the "Frisco Line". Today, the BNSF Railway directly runs through the town.

Rolla was also a regular stop along U.S. Route 66, as it is almost located exactly halfway between the larger cities of St. Louis and Springfield. Today, Interstate 44, U.S. Route 63, and Route 72 all run through Rolla.

Rolla has a mix of a humid subtropical and humid continental climate and a Köppen Climate Classification subtype for this climate is "Cfa".

Brewer Science, a nationwide manufacturer of semiconductors, is headquartered in Rolla.

Hartmann North America started production at a headquarters site in Rolla in July 2017 after the Denmark-based Brødrene Hartmann decided to open such a site in the US. Hartmann is a leading manufacturer of molded-fiber egg packaging, a manufacturer of fruit packaging in South America, and a manufacturer of machinery for producing food packaging. Hartmann used and later expanded the former Briggs & Stratton plant for their Rolla facility.

Rolla is home of the Rolla Bulldogs at Rolla High School.

Rolla is an important center for state and federal education and research in science and technology. It is the home of the Missouri University of Science and Technology (Missouri S&T), founded as the Missouri School of Mines and Metallurgy in 1870 and known as the University of Missouri–Rolla (UMR) from 1964 through 2007. Missouri S&T is well known for its engineering and computer science departments. In addition, the US Geological Survey operates a large regional facility with various centers: the National Geospatial Technical Operations Center III, the Missouri Water Science Center, the Mid-Continent Geographic Science Center, National Spatial Data Infrastructure Partnership Office Liaisons, and the Rolla Science Information and Library Services office.

Rolla has a lending library, the Rolla Public Library.

All content from Kiddle encyclopedia articles (including the article images and facts) can be freely used under Attribution-ShareAlike license, unless stated otherwise. Cite this article:
Rolla, Missouri Facts for Kids. Kiddle Encyclopedia.