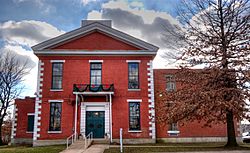 Phelps County is a county located in the central portion of the U.S. state of Missouri. As of the 2010 census, the population was 45,156. The largest city and county seat is Rolla. The county was officially organized on November 13, 1857, and was named after U.S. Representative and Governor of Missouri John Smith Phelps.

According to the U.S. Census Bureau, it included the mean center of U.S. population in 2000.

Phelps County comprises the Rolla, MO Micropolitan Statistical Area. Much of the county is included within the Ozark Highlands American Viticultural Area (AVA). Vineyards and wineries were first established in the county by Italian immigrants in Rolla. Since the 1960s, winemakers have revived and created numerous vineyards in Missouri and won national and international tasting awards.

The first settlers came to this area in 1818 building along the riverbanks, doing a little farming. In 1844 John Webber built the first house within the present city limits of Rolla.

One year later, Lieutenant James Abert started the first railroad reconnaissance survey in Rolla. Abert was later to become the first professor of Civil Engineering at the Missouri School of Mines. The founder of Rolla, Edmund Ward Bishop, was originally a railroad construction contractor in New York. He came to this part of the country in 1853 with the job of building the “Frisco Branch of the Southwest Railroad.”

Because of an urgent demand, Phelps County was created by legislative action on November 13, 1857 from portions of Pulaski, Maries and Crawford counties. A special commission was appointed to select the site for a county seat, with instructions to locate the site on the mail line of the railroad as near the center of the county as possible. Bishop then offered a tract of some 50 acres (200,000 m2) for the official town site, and it was accepted. There was disagreement over the site - the "westerners" wanted Rolla, and the "easterners" wanted Dillon, so the General Assembly did not legally declare Rolla to be the official county seat until 1861. The group favoring Dillon, approximately 600 of them, signed a petition of protest citing the fact that only two of the three commission members had met to consider the possible sites for the county seat. They contested the decision all the way through the Missouri Supreme Court. Before the high court could make a decision, however, the Legislature took action on January 14, 1860, confirming the location of the county seat at Rolla. Smarting under a considerable amount of criticism concerning the matter, all members of the county court resigned during April 1858, but later withdrew their resignations. It was finally settled in favor of Rolla.

Rolla was officially surveyed, laid out and named in 1858. Bishop wanted to call it Phelps Center, since his house was the center of the county. John Webber preferred the name "Hardscrabble" for the obvious reasons. George Coppedge, another original settler, and formerly of North Carolina, favored "Raleigh" after his hometown. The others agreed with Coppedge on the condition that it shouldn't have "that silly spelling, but should be spelled 'Rolla.' The county seat locating commission designated the area now known as Rolla to be the county seat.

The town of Rolla did not exist as of November 13, 1857, when the county was created. Only the J. Stever office and John Webber's home were located in the area. Early court business included the location and opening of roads from the county seat to various places within the state, including St. Louis, Springfield, Jefferson City, Lake Spring, and Salem. It is in this last road order, dated in July 1858, that the use of the name Rolla first appears in the court records. The name was used earlier, in May 1858, in a deed of railroad land to the county.

The railroad ran its first train on December 22, 1860, making Rolla the terminus of the road. Until the continuation of the Frisco, all goods were loaded on wagons and transported to Springfield and south and west on what is now U.S. Highway 66 (Interstate 44). During the American Civil War, Rolla was an important military post with as many as 20,000 Union troops here. The original Phelps County Court House was transformed into a hospital during the war.

In April 1861, Fort Sumter was fired upon and a decision was made to support the South. On May 10, the Circuit Court session saw a heated debate of secession, which caused a breakup of the proceedings. As the story goes, Circuit Court Judge James McBride soon departed to assume command as a Confederate general under Sterling Price. Outside the courthouse, a group of men drew down the United States flag and raised a Confederate flag, which had been hastily pieced together by the women of Rolla. The tension was thick when the group then moved to the newspaper office of Charles Walder, a Union supporter and editor of the Rolla Express. Walder was forced to close his shop and cease printing. Southern sympathizers patrolled the town day and night, often ordering Union sympathizers to leave town.

On June 14 of that year, General Franz Sigel arrived by train with his 3rd Missouri Infantry and took over the town. From that day until the close of the war, Rolla was in Union hands.

The 13th Illinois Infantry Regiment, under Colonel John B. Wyman, was brought in to guard Rolla and the Pacific Railroad’s terminal. It was this regiment that did the basic planning and building of Fort Wyman, although other regiments undertook the task of finishing it. President Abraham Lincoln’s personal order was that Rolla should be held at all costs. Being situated at the terminus of the railroad, military wagon trains went out from Rolla to all Union armies stationed southwest in Arkansas, Hartville, and Springfield and northwest to the Linn Creek area, now known as Lake of the Ozarks.

After General Price's defeat at Pea Ridge in March 1862, several troops that were organized by Governor Jackson returned home. Confederate sympathizers, unwilling to profess their loyalty and support to the Union after the battle, were treated harshly. One example is the shooting of former Presiding Justice Lewis F. Wright and four of his sons in 1864, after being taken from their homes for "questioning."

Rolla was an important site during the Civil War because the southwest branch of the Pacific Railroad ended here. Thousands of Union troops and their supplies came to Rolla by train from St. Louis and then were transferred to wagon trails to go to the battles of Wilson Creek in Springfield and Pea Ridge and Prairie Grove in Arkansas, plus a number of other smaller skirmishes. The railroad had arrived in Rolla in 1860 but the outbreak of the war halted the westward expansion of the line.

The town of about 600 civilians had a large population of Union troops at that time. Since the Union forces seized control of the town early in the war, they had a big impact upon the town and its operation.

The town was a busy place for the visitor. In 1860 sugar sold for 10 cents a pound, tobacco for 30 cents a pound. Whiskey went for 25 cents a gallon. City lots sold for $25 per lot. The Courthouse was used as a hay storage barn and later as a hospital for wounded soldiers. After the commanding general of the Union Forces, General Nathaniel Lyon, was killed at the Wilson's Creek battle near Springfield, his body was brought to Rolla to be transported back East for burial. Old town Rolla was located along Main Street near the Courthouse. The business district moved to Pine Street in the late 19th Century.

Following the Union defeat at Wilson's Creek on August 10, 1861, the Union Army fell back to Rolla and began building an earthen fort on the top of a hill alongside the present Highway 63 about a mile from the Courthouse. The rectangular fort had a dry moat around the perimeter with 32-pound field pieces located on each corner of the fort to cover any attack on Rolla from the south. It was named Fort Wyman after Colonel John B. Wyman. Fort Dette was a more detailed fort that was constructed in 1863 on what is now the campus of Missouri University of Science and Technology. It was constructed in a cross shape with positions for both 24-pound cannons and ports for individual rifle fire.

The Morrill Land-Grant College Act was approved by the U.S. Congress, and in 1863 the Missouri Legislature accepted this opportunity to set up a new type of higher education within the state. The act specified that the "leading object shall be without excluding other scientific and classical studies, and including military tactics, to teach such branches of learning as are related to agriculture and mechanics arts...in order to promote the liberal and practical education of the industrial classes in the several pursuits of professions of life."

The Missouri School of Mines and Metallurgy was founded in 1870 because the area was rich in minerals and because the geographic location was good. Phelps County bid $130,545, including lands and bonds, and was awarded the prize. Today it is known as one of the finest engineering schools in the world. Not confined to mining and metallurgy, it confers bachelor's degrees in 23 fields of engineering and science, as well as graduate degrees in 28 fields of engineering and science.

According to the Association of Religion Data Archives County Membership Report (2000), Phelps County is a part of the Bible Belt with evangelical Protestantism being the majority religion. The most predominant denominations among residents in Phelps County who adhere to a religion are Southern Baptists (38.24%), Roman Catholics (11.43%), and Christian Churches & Churches of Christ (10.75%).

All content from Kiddle encyclopedia articles (including the article images and facts) can be freely used under Attribution-ShareAlike license, unless stated otherwise. Cite this article:
Phelps County, Missouri Facts for Kids. Kiddle Encyclopedia.