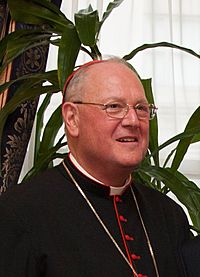 Timothy Michael Dolan (born February 6, 1950) is an American cardinal of the Catholic Church. He is the tenth and current Archbishop of New York since 2009.

Dolan was the President of the United States Conference of Catholic Bishops from 2010 to 2013.

Dolan is widely known for his conservative views. He was Archbishop of Milwaukee from 2002 to 2009 and Auxiliary Bishop of St. Louis from 2001 to 2002.

All content from Kiddle encyclopedia articles (including the article images and facts) can be freely used under Attribution-ShareAlike license, unless stated otherwise. Cite this article:
Timothy M. Dolan Facts for Kids. Kiddle Encyclopedia.