Clinton is a city in and the county seat of Clinton County, Iowa, United States. The population was 24,469 as of 2020. Clinton, along with DeWitt (also located in Clinton County), was named in honor of the sixth governor of New York, DeWitt Clinton. Clinton is the principal city of the Clinton Micropolitan Statistical Area, which is coterminous with Clinton County. Clinton was incorporated on January 26, 1857. 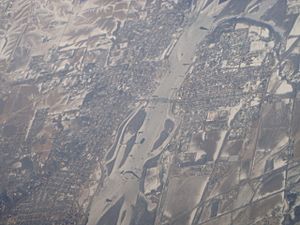 View of Clinton on the left side of the Mississippi river and its neighbor, Fulton, Illinois on the right side of the river as seen from 35,000 feet

Among the first settlers of European origin in the Clinton area was Elijah Buell, who built a log cabin on July 25, 1835 and established the town of Lyons, named after the French city of the same name. Lyons later merged with Clinton.

Clinton was platted as the town of New York in 1836 by Joseph Bartlett. In March 1837, Noble and Sarah Gregory Perrin purchased 136 acres (0.55 km2) of land in what is now Clinton and raised their family in a cabin located approximately at the foot of the railroad bridge. Their oldest daughter, Valeria, married Dr. Augustus Lafayette Ankeny, who participated in the Blackhawk war and came to Lyons in April 1850.

Mary Perrin, born September 26, 1837, was the first female child of European ancestry born in Clinton County. In 1839, as in most early river towns, the town consisted of a sprinkling of cabins, two stores and a tavern. In 1855, the Chicago, Iowa, Nebraska Railroad announced it would cross the river at Little Rock Island adjacent to Bartlett's settlement. The Iowa Land Company was organized on May 26, 1855 and on July 4, bought Bartlett's tract and renamed it Clinton, in honor of DeWitt Clinton, two-time governor of New York and one of the driving forces behind the construction of the Erie Canal.

On November 10, 1855, the first plat of the city of Clinton was signed. On January 26, 1857 the city was granted a charter and on March 7, the charter was adopted. On April 5, 1859, the amended charter of the city was adopted, which lasted until a general charter was adopted in 1867. In June 1859 the railroad line was completed to Cedar Rapids. The first train crossed from the Illinois shore to Little Rock Island at noon, January 9, 1860, and was ferried from there to the Iowa shore. In January 1864, construction was started on the span from Little Rock Island to the Iowa shore and was completed on January 6, 1865. The original single track railroad bridge was replaced by a double track bridge that was completed in 1909.

The first public school in Clinton was conducted in a log house near the W.J. Young upper mill. It was erected in the winter of 1855-56 and Isaac Baldwin was its first teacher. St. Irenaeus School was opened in 1852. 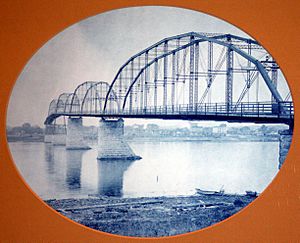 Between the 1850s and 1900, the cities of Lyons and Clinton quickly became centers of the lumber industry and were regarded as the "Lumber Capital of the World." Huge log rafts were floated down the river from Wisconsin and Minnesota, cut into lumber at Clinton, then shipped to the growing communities via the river and the railroads. Companies owned by the W.J. Young, Chancy Lamb, George M. and Charles F. Curtis (Curtis Bros. & Co), David Joyce, Silas W. Gardiner Lyons, and Friedrich Weyerhäuser families soon became among the largest in the nation. In the 1880s and 1890s Clinton boasted 13 resident millionaires, more millionaires per capita than any other town or city in the nation.

In 1877 the noted pianist Carl Lachmund founded the German Conservatorium of Music in Clinton.

The largest, most elaborate party ever held in Clinton celebrated the debut of Emma Lamb and the twentieth wedding anniversary of her parents, Artemus and Henrietta Sabrina Smith Lamb on October 13, 1885. Fellow lumber baron F.C. Weyerhauser, his wife and daughter attended together with several hundred guests all attired in formal wear.

The era of opulence came to an end by 1900, as the northern forests were depleted. The sawmills closed, but the railroad and river, providing economical transportation in all directions, attracted manufacturing and heavy industry. The city still boasts a number of magnificent Victorian mansions, including the Curtis Mansion, now the home of the Clinton Women's Club.

The American Protective Association (APA) was founded in Clinton on March 13, 1887 by Attorney Henry Francis Bowers.

In 1941, with Howard Judd as coach, Clinton High School won the first of its 11 state championships in swimming. This string included five straight championships between 1954 and 1958 and produced 39 individual All Americans and 14 Individual All American Relay Teams (The Howard Judd Story Reception Program June 5, 1966). Clinton’s athletic successes were added to in 1953 when St. Mary’s won the state basketball championship. 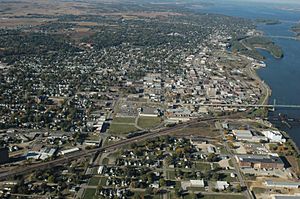 In 2005, Clinton, along with Coon Rapids, Iowa and Sioux City, was awarded one of the inaugural Iowa Great Places designations. This award brought to Clinton a $1 million state budget allocation for cultural and landscape improvements along the city's riverfront.

In 2008, the Archer Daniels Midland corn processing plant added a cogeneration plant to provide for its electrical needs, which burns coal and leftover corn for the energy.

In January 2011, Clinton opened the world's first-ever site of noted rapper Flavor Flav's fast food chain, Flav's Fried Chicken. This was due to the fact that Flav's business partner, Nick Cimino, is a Clinton native and felt that the restaurant's opening would be good for the community. The restaurant was closed down after a mere four months due to low staff retention and bad checks, among other concerns. Rapper Flav has gone on record stating "that restaurant manager Nick Cimino wasn't running the business right.".

The pool of the Mississippi River above Lock and Dam No. 13 is the widest section of the river at 1.8 miles (2.9 km) across. 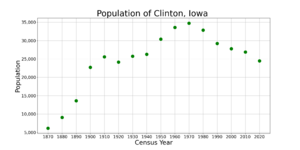 The population of Clinton, Iowa from US census data

Panoramic view of the Mississippi River from Eagle Point Park 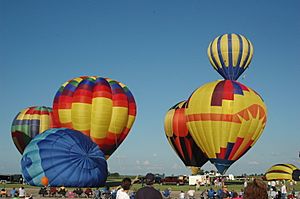 Clinton has a municipal airport (Clinton Municipal Airport, KCWI) that serves the general aviation community. There are two runways, 3-21 which is 5,200' long, and 14-32 which is 3700' long. Numerous instrument approaches are available.

Major railroads include the Union Pacific Railroad and the Canadian Pacific. 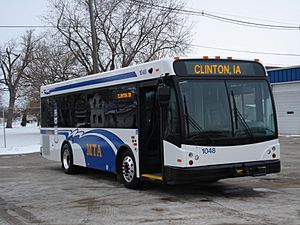 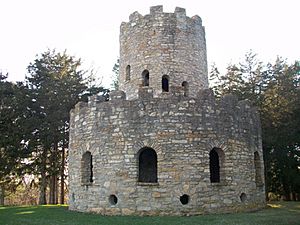 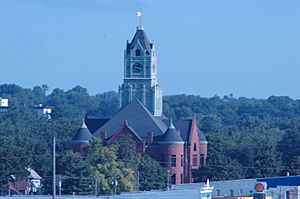 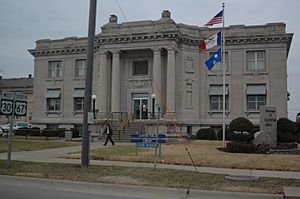 Buildings listed on the National Register of Historic Places:

Notable businesses, past and present

Clinton Community College is in the community.

All content from Kiddle encyclopedia articles (including the article images and facts) can be freely used under Attribution-ShareAlike license, unless stated otherwise. Cite this article:
Clinton, Iowa Facts for Kids. Kiddle Encyclopedia.