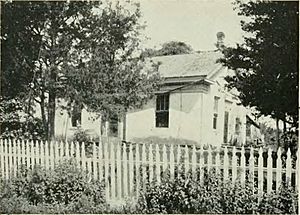 Springdale is a small unincorporated community in Cedar County, Iowa, United States. Historically, the town was predominantly settled by Quakers, and was a way-station in the Underground Railroad. Its most famous residents were the militant abolitionist John Brown, who resided at John Hunt Painter's house near Springdale while making preparations for the raid on Harpers Ferry, and Edwin and Barclay Coppoc, local youths who participated with Brown during the raid. Springdale was also the birthplace of Lawrie Tatum, a frontier Indian agent and the legal guardian of future President Herbert Hoover. No downtown business district remains in Springdale, it is a cluster of houses with a United Methodist church. William Maxson's home, where Brown's men were quartered, was razed in 1938, but its location is marked by a plaque provided by the Daughters of the American Revolution. Although often described as Quaker, Maxson was raised in the faith but at the time of Brown's visit considered himself a follower of Spiritualism.

All content from Kiddle encyclopedia articles (including the article images and facts) can be freely used under Attribution-ShareAlike license, unless stated otherwise. Cite this article:
Springdale, Iowa Facts for Kids. Kiddle Encyclopedia.