King Khalid International Airport (KKIA) opened for operations in late 1983. Until then, what is now Riyadh Air Base served commercial flights to and from Riyadh. Increased international and local air transport requirements for Riyadh made the change necessary. Riyadh Air Base, which is much closer to the city center, is operated by the Royal Saudi Air Force. 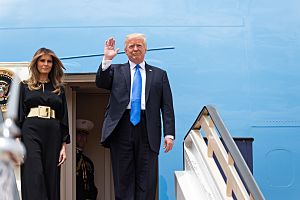 The airport consists of five passenger terminals, with eight aero-bridges each, a mosque, covered and uncovered car parking for 11,600 vehicles, an additional Royal Terminal for the kingdom's guests, government heads, and Saudi royal family use, a central control tower, one of the world's tallest, and two parallel runways, which are each 4,260 metres (13,980 ft) long. The land area allocated for this airport is among the largest in the world. This airport was an alternative landing site for NASA's Space Shuttle.

The design of KKIA Mosque is one of the most distinct landmarks in the airport by virtue of its Islamic architecture. It can accommodate 5,000 worshipers inside and another 5,000 in the plaza outside. Its location in the center of the passenger terminal establishes it as the most important structure on the airport and makes it the first sight visitors see as they leave the arrival area. 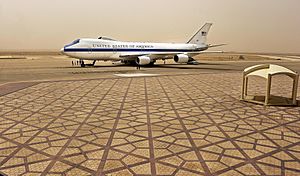 KKIA has more than 500,000 square metres (5,400,000 sq ft) of landscaping. Over 225,000 trees, vines, shrubs and ground cover plants were used to landscape the airport site and the interior courtyards.

KKIA was the first airport in the Kingdom to install airbridges, to speed up handling and turnaround times. Each terminal has eight gates with air-bridges effectively eliminating the need for bus journeys between the terminal buildings and waiting aircraft.

All content from Kiddle encyclopedia articles (including the article images and facts) can be freely used under Attribution-ShareAlike license, unless stated otherwise. Cite this article:
King Khalid International Airport Facts for Kids. Kiddle Encyclopedia.