The ballpark was built to replace the now-demolished Veterans Stadium (a football/baseball multipurpose facility), and features a natural grass and dirt playing field as well as a number of Philadelphia-style food stands, including several which serve cheesesteaks, hoagies, and other regional specialties. 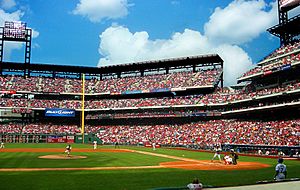 The Phillies originally wanted a downtown ballpark and Various locations were proposed. The City and team eventually settled on building at the South Philadelphia Sports Complex, on the site of an old food warehouse. In the years that followed, residents, fans and owner Bill Giles expressed regret that the new ball park was not located in Center City. Regardless of location, the team set records in 2010 for attendance (3,647,249 fans, averaging 45,028) and sellouts (81).

Even with these modifications, the park has a reputation as one of the most hitter-friendly parks in baseball. In 2009, it gave up 149 home runs, the most in the National League.

Behind center field is Ashburn Alley, named after Phillies Hall of Fame center fielder Richie Ashburn, who played for the team from 1948 to 1959 and was a Phillies broadcaster from 1963 until his death in 1997. It is seen by Phillies fans as a compromise between the Phillies and their fans, many of whom wanted Citizens Bank Park named in honor of Ashburn.

Ashburn Alley is named for the slightly-overgrown grass which bordered the third base line at Shibe Park where Ashburn was famous for laying down bunts that stayed fair. The new Ashburn Alley, located near Ashburn's defensive position, is a walkway featuring restaurants, games and memorabilia from Phillies history. Ashburn Alley also features a memorabilia shop and a large bronze statue of Ashburn directly behind center field.

Features of the Alley are: 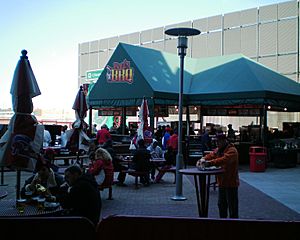 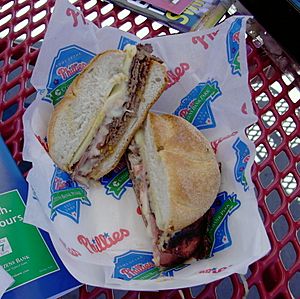 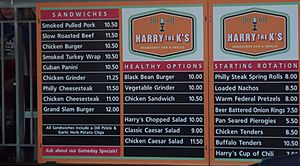 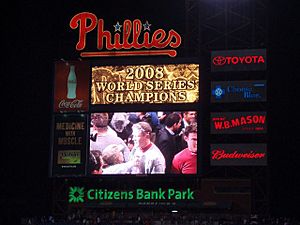 The scoreboard when the Phillies won the 2008 World Series

The Philadelphia Phillies are the first Major League Baseball team to join the Environmental Protection Agency's Green Power Partnership Program which motivates organizations across the world to purchase green power in order to minimize environmental impact.

The Phillies announced on April 30, 2008 that their home field, Citizens Bank Park, will be powered with 20 million kilowatt-hours (kWh) of green energy purchased in Green-e Energy Certified Renewable Certificates (RECs). The EPA stated that this purchase holds the record in professional sports for the largest purchase of 100% renewable energy. Glass, cardboard and plastics used during game day are recycled; frying oil is being recycled to produce bio-diesel fuel, and biodegradable, recyclable, and compostable products, service-ware, and plastics have been introduced.

The first concert at the park was Jimmy Buffett & The Coral Reefer Band on August 25, 2005, they returned on June 14, 2008. The Eagles, The Dixie Chicks and Keith Urban were scheduled to perform on June 14, 2010, but the show was cancelled.

Other performers who have played at the park include Billy Joel and Elton John in a duet concert, Bon Jovi and The Police. On July 14, 2012, former Pink Floyd member Roger Waters performed The Wall live as part of his world tour. On September 2 and 3, Bruce Springsteen played two shows as part of his Wrecking Ball Tour in front of more than 73,000 people, and he became the first act to perform at every major live music venue in Philadelphia.

Due to the City of Philadelphia's smoking ban, smoking is only permitted at the third base gate and the left field gate.

All content from Kiddle encyclopedia articles (including the article images and facts) can be freely used under Attribution-ShareAlike license, unless stated otherwise. Cite this article:
Citizens Bank Park Facts for Kids. Kiddle Encyclopedia.