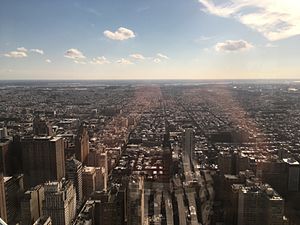 View of South Philadelphia from One Liberty Observation Deck

The area continued to grow, becoming a vital part of Philadelphia's large industrial base and attracting immigrants from Italy, Ireland, Poland, and many Southern European and Eastern European countries during the late 19th and early 20th centuries, as well as Black American migrants from the southern United States during the Great Migration of the early 20th century. The immigrants and migrants became the basis of South Philadelphia's unique and vibrant culture that developed over the next several decades. Struggling to maintain their Catholic identity in a mostly Protestant city, the Irish built a system of Irish Catholic churches and parochial schools for their children, including Catholic high schools. The later immigrant populations of Italians and Poles were also Catholic. Initially, these populations attended existing Catholic churches but built their own ethno-national churches when possible. However, the more established Irish-American ethnic community controlled the Catholic clergy and hierarchy for decades in Philadelphia and throughout the region, often excluding the more recent Italian (and, to a lesser extent, Polish) populations from participating in the church hierarchy. In addition to the influx of Catholic immigrants, many Polish Jews and other Jews from Eastern Europe settled in South Philadelphia during the first half of the 20th century, especially in the diverse area now known as Queen Village where Jewish immigrants lived among Catholic Polish immigrants, Irish-Americans, and Italian immigrants. A smaller but significant Greek immigrant community also flourished around this time, leading to the establishment of Greek Orthodox parishes in South Philadelphia. Despite this dramatic growth in population, the low funding of education by the city resulted in the first public high school not being formed in South Philadelphia until 1934.

Attracted to the industrial jobs, the new residents of South Philadelphia created communities that continued many of their Old World traditions. While many of the new arrivals were Catholic, neighborhood parishes reflected their ethnic and national traditions. Monsignor James F. Connelly, the pastor of the Stella Maris Catholic Church and an editor of the 1976 work The History of the Archdiocese of Philadelphia, said in a 2005 Philadelphia Inquirer article that each parish church "offer[s] the immigrants the faith they were familiar with." With the dramatic loss of industrial jobs during mid-20th century restructuring, there were population losses in South Philadelphia as well as other working-class parts of the city, and some neighborhood Catholic schools had to close.

Many of the community clubs that create the annual Mummers Parade every New Year's Day have traditionally been from South Philadelphia, especially those located on the largely Irish American S. 2nd Street ("Two Street") in the Pennsport neighborhood.

According to the United States Census Bureau, South Philadelphia has an area of 9.7 sq. miles, of which none is water. 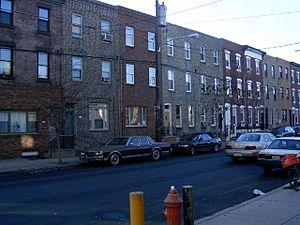 On January 22, 2010 the Associated Press said "South Philadelphia has been growing more diverse for decades, but the last 20 years have seen the greatest influx of Asian and Hispanic families." David Elesh, a Temple University urban sociologist, said that of the almost 60,000 Philadelphia residents who reported being born in China, many lived in South Philadelphia.

See also: History of the Italian Americans in Philadelphia

See also: History of the Irish Americans in Philadelphia

Much of South Philadelphia's Irish population is located is the eastern part of the section. Pennsport, which is also locally referred to as "Two Street", is arguably the most well known Irish neighborhood in South Philadelphia. Pennsport is also home to many of the cities Mummers clubs, where some are known for their Irish American themes. Other Irish neighborhoods include Grays Ferry, Devil's Pocket, and areas of Girard Estate, Southwest Center City, and Whitman.

Philadelphia's large Irish community, however, is more prominent in other sections of the city, most notably Northeast Philadelphia.

Black Americans have lived in South Philadelphia since the early 19th century at the very least, though the city of Philadelphia proper was home to a significant population of free blacks and fugitive slaves since at least the 18th century. The majority of the current black population in South Philadelphia, however, is descended from Southern black migrants that moved into the city in high numbers during the first Great Migration in the early 20th century. South Street was originally considered the cultural and commercial center of this community, though the community became increasingly concentrated to western areas below South Street, including Point Breeze, Southwest Center City, Schuylkill, and Grays Ferry. Point Breeze and South Street particularly served as Philadelphia's "Harlem" during the first half of the 20th century. The first Black staffed police station and fire station were located on South Street. Famous Black South Philadelphians include opera contralto Marian Anderson and musicians Kenny Gamble and Chubby Checker. The Udunde Festival, arguably the largest street festival in Philadelphia, is an African-American celebration that is held annually in the South Street area. As of 2013, those that identified as "Black alone" or in combination with another race totaled 45,482 persons living in the zip codes 19145, 19146, 19147, and 19148.The Black population in South Philadelphia has historically constituted between 25% and 30% of South Philadelphia's population - 27% Black alone and in combination with another race as of a 2013 population estimate.

I-95 runs north and south through South Philadelphia and, in this area, provides commuters with access to Philadelphia International Airport, I-76, the South Philadelphia Sports Complex, and the Walt Whitman Bridge. The Girard Point Bridge section of I-95 crosses over the mouth of the Schuylkill River, where it merges with the Delaware River.

I-76 becomes the Schuylkill Expressway at Passyunk Avenue in South Philadelphia and allows access between this section of the city and University City, Center City, 30th Street Station, and the western suburbs.

In addition, PA Route 291 serves as a major artery between the area and Delaware County, crossing the Schuylkill River via the Platt Bridge (named for Medal of Honor recipient George C. Platt). Broad Street is part of PA Route 611.

South Philadelphia is served by bike lanes on many streets going in all directions. Snyder Avenue has bike lanes going East and West. Columbus Boulevard has North and South bike lanes. 22nd Street provides Northward lanes for cyclists. Some streets such as 11th Street have both Bike lanes and Sharrows or Shared lane marking.

As of 2016[update] two Taiwanese airlines, China Airlines and EVA Air, provides private bus services to and from John F. Kennedy International Airport in New York City for customers based in the Philadelphia area. These bus service stop in South Philadelphia. 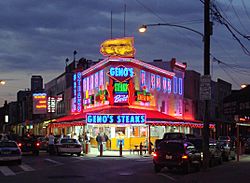 South Street has long been considered the border between South Philadelphia proper and Center City. It originally ran east and west (although traffic is now routed east one-way). Many bars, nightspots, shops, and restaurants are located along this neon-lit hotspot, with occasional live music venues (including the TLA) along the way.

The intersection of 9th Street and Passyunk Avenue is home to the regionally famous Geno's Steaks and Pat's King of Steaks cheesesteak shops, fierce competitors in the local deli market for decades. Also, nearby is the city's open-air Italian Market, specializing in fresh produce, meats, and other foods. It is lined by specialty shops, such as butchers, bakeries and cheese/grocery stores, as well as one for kitchen goods, and new cafes and coffee houses. The area was featured in the film Rocky and its sequels. This is the heart of an annual street festival celebrating the neighborhood's food. 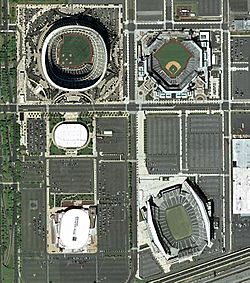 The configuration of the South Philadelphia Sports Complex in early 2004. Clockwise from top right: Citizens Bank Park, Lincoln Financial Field, Wells Fargo Center (formerly the site of John F. Kennedy Stadium), Wachovia Spectrum (razed in 2010–11), and Veterans Stadium (demolished on March 21, 2004). Interstate 95 can be seen running through the bottom-right corner of the photo.

The sports complex was once home to Veterans Stadium (The Vet) which stood from 1971 to 2004; John F. Kennedy Stadium, which stood from 1925 to 1992; and the Spectrum, which was in use from 1967 to 2009 and was demolished in 2011. The NovaCare Complex, located on Pattison Avenue just west of the stadium area, serves as the practice facility of the Philadelphia Eagles. They now play at Lincoln Financial Field.

The Philadelphia Naval Shipyard is located in this section of town along the Delaware River. For decades during the World Wars and after, the shipyard was a major employer, whose craftsmen built new ships and repaired and maintained existing ones. With the decline in the military uses, the area is being redeveloped by the Navy and city for a variety of business and industrial uses.

Washington Avenue, between 16th St. on the west and Front St. on the east, is home to many Asian businesses, including Vietnamese, Chinese and Korean. Among these are restaurants of all types, two large Asian supermarkets, jewelers and a wide variety of specialty shops.

Passyunk Avenue, running on a diagonal from Broad Street to South Street, is a formerly thriving consumer district currently undergoing revitalization efforts. Within the past few years, several coffeeshops, restaurants and bars have opened which appeal to the younger population beginning to live in the area. In addition, a farmers' market is held on Wednesday nights at one of the squares.

2300 Arena (better known as the ECW Arena) at the corner of Swanson Street and Ritner Street is a venue known for hosting boxing and professional wrestling events.

All content from Kiddle encyclopedia articles (including the article images and facts) can be freely used under Attribution-ShareAlike license, unless stated otherwise. Cite this article:
South Philadelphia Facts for Kids. Kiddle Encyclopedia.