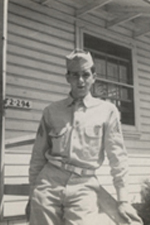 Guarnere as a young solider

William J. "Wild Bill" Guarnere (April 28, 1923 – March 8, 2014) was an American World War II veteran and author. He was known for being played in the HBO miniseries Band of Brothers. He fought during the Battle of Normandy and at the Battle of the Bulge. He was born in Philadelphia, Pennsylvania.

All content from Kiddle encyclopedia articles (including the article images and facts) can be freely used under Attribution-ShareAlike license, unless stated otherwise. Cite this article:
William Guarnere Facts for Kids. Kiddle Encyclopedia.