Camp Toccoa (formerly Camp Toombs) was a United States Army paratrooper training camp during World War II five miles (eight kilometers) west of Toccoa, Georgia. It was first planned in 1938, constructed by the Georgia National Guard and the Works Projects Administration beginning 17 January 1940, and was dedicated 14 December 1940. The U.S. Army took over the site in 1942. 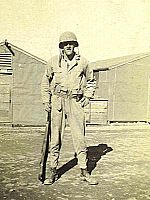 The U.S. Army took over a site with few buildings or permanent structures: personnel were originally housed in tents. More permanent barracks were built as the first soldiers started to arrive.

Initially, Camp Toccoa used the Toccoa municipal airport for jump training, but following a transport accident, it was abandoned for having too short a runway for safe C-39 and C-47 operations. All further jump training occurred at Fort Benning, Georgia.

The most prominent local landmark is Currahee Mountain. Paratroopers in training ran from the camp up the mountain and back, memorialized in the HBO series, Band of Brothers, with the shout "three miles up, three miles down." Members of the 506th Parachute Infantry Regiment still refer to themselves as "Currahees", derived from the Cherokee word gurahiyi, which means "stand alone, together". The crest is surmounted by a group of 6 fully deployedparachutes.

Rod Serling, creator of the Twilight Zone, started his military career here in 1943.

The camp closed at the end of the war. In the late 1940s, it served as a Georgia State Prison site, housing primarily youth offenders, but several escapes forced the state to close the site, moving the operation to a new facility at Alto, Georgia. The twisting trail up Currahee is now named for Colonel Sink. The only remaining building from the camp is the mess hall, which sits on a corner of a Milliken & Company textile plant. The Patterson Pump Company occupies another portion of the grounds.

The facility was initially named Camp Toombs General after Confederate Civil War General Robert Toombs. In 1942, Colonel Robert Sink, commander of the 506th Parachute Infantry Regiment, one of the first units to train there, thought that it would prompt superstitions to have young men arrive at Toccoa, travel Route 13 past the Toccoa Casket Company to learn to jump at Camp "Tombs", so he persuaded the Department of the Army to change the name to Camp Toccoa.

All content from Kiddle encyclopedia articles (including the article images and facts) can be freely used under Attribution-ShareAlike license, unless stated otherwise. Cite this article:
Camp Toccoa Facts for Kids. Kiddle Encyclopedia.