Battle of the Bulge facts for kids

The Battle of the Bulge was a battle of Allied Powers against Nazi Germany that took place during World War II. The battle took place between middle of December 1944 to middle of January 1945.

Until the end of 1944 the Allies had been able to recapture France and Belgium from Germany. However, the Allied forces were stopped. There were a few reasons why were they stopped:

Adolf Hitler's plan was to push the Allied forces back from the Ardennes forests, recapture the port of Antwerp and prove that Germany would not surrender. As a result of this step, he expected the Allies to end the war with Germany so that Germany could focus on stopping the Soviets from the Eastern Front.

The plan did not work. The Soviet Union forces almost reached Berlin and the Third Reich was about to collapse. Hitler gathered his last good soldiers to mount one last attack (250,000 soldiers and 1,000 tanks). He did it although his German generals did not agree with this plan of attack. 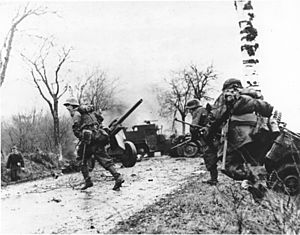 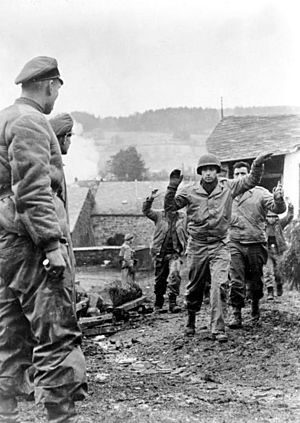 American soldiers of the 3rd Battalion 119th Infantry Regiment are taken prisoner by members of Kampfgruppe Peiper in Stoumont, Belgium on 19 December 1944.

The attack began on December 16, 1944. Three German panzer armies attacked through the Ardennes, in what had been considered a quiet sector.

The initial advance caught the Americans by total surprise. They had been told (by ill-informed intelligence services) that the Germans in this area were unable to launch a counter-attack. Most of the American troops fell back or surrendered. However, in most sectors, the Germans made a major tactical blunder by letting the first wave consist mostly of unsupported infantry. As a result, strong resistance at a few isolated spots in key areas greatly slowed the German advance—resistance that tank support would have destroyed quickly. As the Americans fell back, they blew up bridges and fuel dumps along the way, denying the Germans critically-need fuel, and slowing them further. Poor road conditions further hampered the German advance. It took 36 hours to advance from Eifel to Stavelot: it had taken 9 hours in 1940.

Hitler had predicted it would take Eisenhower two or three days to realize that the fighting in the Ardennes was a major offensive and not a local counter-attack. His prediction proved quite wrong: before the first day was finished, Eisenhower had ordered vast reinforcements to the area. The Red Ball Express stopped delivering supplies and started moving troops to the area. Within a week, 250,000 troops had been sent into the area. At the same time, the 101st Airborne Division (along with a combat team from the 10th Armored Division) was ordered move to and defend the town of Bastogne.

Meanwhile, the weather was having the desired effect: starting on December 16, terrible snowstorms kept the Allied airpower grounded. The air forces would be grounded for a week, and could not fly again until December 23. The German attacks in the north fared very badly. Strong American resistance stalled the German advance quickly. In the south, they fair better. All along the lines, however, the inexperience of the German troops was evident. They tended to attack from the open, and marched without cover (making them prime targets for American ambush).

On December 17, 1944, near the hamlet of Baugnez, elements of Waffen-SS Kampfgruppe Peiper encountered the American 285th Field Artillery Observation Battalion. After a brief battle, the Americans surrendered. They, and some other Americans captured earlier, were disarmed and sent to stand in a field near the crossroads. The German officers shot all the prisoners. News of the killings raced through Allied lines.

During the Battle, Otto Skorzeny, the German commando who rescued Benito Mussolini, led a battalion of 500 English-speaking German soldiers in Operation Greif.

Some of the disguised Germans were captured. During interrogation, they lied about their mission, saying that their mission was to go to Paris to either kill or capture General Eisenhower. Security around the general became airtight, and he was confined to his headquarters. Because these prisoners had been captured in enemy uniform, they were later executed by firing squad; this was the standard practice of every army at the time, and was expressly allowed under the Geneva Convention. 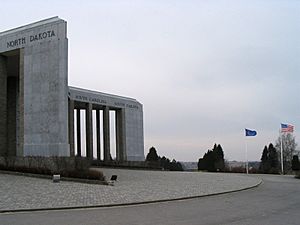 The Mardasson Memorial near Bastogne, Belgium

On December 19, the senior Allied commanders met in a bunker in Verdun. Eisenhower, realizing that with the Germans out in the open and on offensive, the Allies could destroy them much more easily than if they were on the defensive.

By December 21, the German forces had completely surrounded Bastogne, defended by the 101st Airborne. Conditions inside the perimeter were tough — most of the medical supplies and personnel had been captured. However, despite determined German attacks, the perimeter held.

The German tactics during the siege of Bastogne were terrible. Rather than launching one simultaneous attack all around the perimeter, they would concentrate their attack on one spot, then another, then another. The Americans could move reinforcements to repel one attack, then shuffle them to repel the next attack, and so on. The Germans, despite having more men could not breach the American defenses.

The weather broke on December 23. The Allied air forces dropped in much needed supplies—medicine, food, blankets, ammunition, and artillery shells. A team of volunteer surgeons flew in by glider and began operating in a tool room. Elsewhere, the P-47s pinned down German tanks and immobilized the German army. 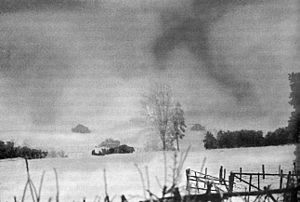 By December 24 the German advance was effectively stalled short of the Meuse River, they had outrun their supply lines, and shortages of fuel and ammunition were becoming critical. Patton's Third Army was now battling to relieve Bastogne. At 16:50 on December 26, the lead element of the Fourth Armored Division reach Bastogne, and the siege was over.

On January 1, in an attempt to keep the offensive, the Germans launched two offensives. The Luftwaffe launched a major campaign against Allied airfields. Thousands of planes attacked enemy airfields, destroyed about 180 aircraft and damaged another 100; however, the Luftwaffe lost 277 planes. On that same day, Operation Northwind, an attack into Alsace, began. The fighting ranged over 150 kilometers from Saarbrucken in the north to the Rhine in the South. After twenty grueling days of fighting, the Americans fell back (having taken some 11,609 casualties while inflicting 23,000)

The American counter-attack was slated to begin on January 1. Patton's Third Army in the south (centered around Bastogne) would attack north, while Montgomery's forces in the North would strike South. The two forces would meet up at Houffalize.

Against protests from General Omar Bradley, Eisenhower had put American troops in the north (the 1st and 9th American Armies) under the command of Bernard Montgomery. Eisenhower wanted Montgomery to go on the offensive on January 1. Had they quickly struck south, they would have met up with Patton's advancing Third Army and cut off most of the attacking Germans. Instead, as was his custom throughout the war, Montgomery delayed the attack as long as possible. He did not launch the attack until January 3.

American progress in the south was also slow - about a kilometer a day (at the start of the offensive, the two Armies were separated by about 40 kilometers). The Germans did their best to slow the Americans, while letting their army retreat in good order. Much of the German army escaped the battle intact, although the fuel situation had become so dire that much of the German armor had to be abandoned.

On January 7, 1945, Montgomery held a press conference, where he took credit for most of the victory. He also said that he thought the counter-offensive was going very well (when in fact, it was going extremely slowly). Eisenhower later retracted his earlier order, and placed the American armies back under the command of Omar Bradley. Never again would American troops be put under British command.

The two American forces met up on January 15, 1945, and the Battle of the Bulge had ended.

The Allies and the Germans did not gain or lose any land. Because the Allies had a much larger army, they could make up their losses, but for the Germans they could not replace what they had lost. It was their last major attempt to gain ground.

The battle in popular culture

Interesting facts about the Battle of the Bulge 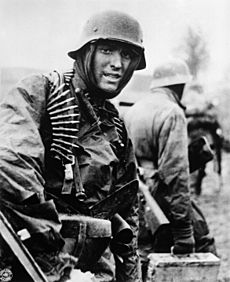 A German machine gunner marching through the Ardennes in December 1944

The German codename for the attack was “Operation Watch on the Rhine” which was named after a German patriotic hymn.

All content from Kiddle encyclopedia articles (including the article images and facts) can be freely used under Attribution-ShareAlike license, unless stated otherwise. Cite this article:
Battle of the Bulge Facts for Kids. Kiddle Encyclopedia.