Kids Encyclopedia Facts
This page is about the Philadelphia neighborhood. For the string band, see Pennsport (string band).

Pennsport is a neighborhood in the South Philadelphia section of Philadelphia, Pennsylvania, United States.

Pennsport is home to a large working-class Irish American population and is home to many of the organizations ("clubs") which are located on 2nd Street (known locally as "Two Street") that perform in Philadelphia's annual Mummers Parade on New Year's Day. It was also the site of a controversial push for casinos along the Philadelphia waterfront. Foxwoods Casino was proposed for Christopher Columbus Boulevard at Reed Street.

The 2000 census listed Pennsport's population as 26,300, a figure that includes the populations of Southwark, Queen Village, and Whitman.

According to the Genealogy of Philadelphia County Subdivisions, Pennsport was originally part of Moyamensing Township. Most of the area north of present-day Mifflin Street was included in the Southwark District from 1794 until the consolidation of Philadelphia in 1854. At that point, it was mostly contained in the First Ward. The First and Second Wards ran east of Passyunk Avenue and were divided by Wharton Street (First to the south, Second to the north). The southern boundary of the First Ward initially spanned south to the river, but it was stopped at Mifflin Street in 1898. 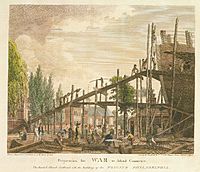 "The building of the Frigate Philadelphia", Plate 29 of Birch's Views of Philadelphia (1800). The man standing in the foreground may be a portrait of Humphreys.

The first United States naval yard was located in what is now Pennsport at Federal Street on the Delaware River. The naval yard was established 1801 and was active until 1875, when it moved to League Island, where the Philadelphia Navy Yard business campus is currently located. Prior to its establishment as the official naval yard of the United States, it was the private shipyard of famous shipbuilder Joshua Humphreys, who designed the original six frigates of the United States Navy. One of those six original frigates, the USS Philadelphia, was built at the site.

All content from Kiddle encyclopedia articles (including the article images and facts) can be freely used under Attribution-ShareAlike license, unless stated otherwise. Cite this article:
Pennsport, Philadelphia Facts for Kids. Kiddle Encyclopedia.