According to historical maps, much of what is South Philadelphia including Point Breeze was still not yet developed and integrated into the rectilinear grid system by 1843 or later. "Point Breeze" was a point on the western side of the Schuylkill River approximately where the Passyunk Avenue bridge is today. It and the area across from it on the eastern side of the river were established as an area for oil refinery in the 1860s by Atlantic Petroleum Storage Company, later the Atlantic Refining Company. From this point, oil that had been drilled in Western Pennsylvania could be processed and then shipped down the Schuylkill, to the Delaware and out to sea. The Avenue that connected the city proper to the east side of the river at Point Breeze had existed by 1808 as "Long Lane." In the mid-to-late 1800s, development of Philadelphia continued westward from the Delaware River and southward from Market Street. Long Lane also began to be known as Point Breeze Avenue by 1895 and lent its name to the neighborhood that was to spring up here. "The earliest references to Point Breeze" as a neighborhood "date to 1895." The area was first settled by working-class European Jewish immigrants followed by Italian and Irish immigrants. In 1930s the neighborhood saw an influx of African Americans some of which were involved in The Great Migration escaping Jim Crow in the South and looking for work in the urban centers of the north. At this time the African American epicenter of Philadelphia was shifting from near Mother Bethel African Methodist Episcopal Church at 6th and Lombard to west of Broad. 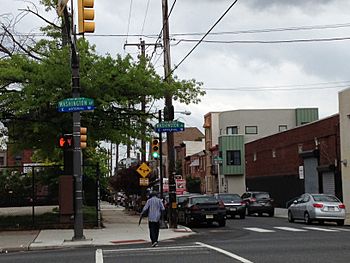 Through the 1960s Point Breeze was reported to be a safe, clean, relatively integrated and self-sufficient neighborhood with a thriving business district along Point Breeze Avenue itself known to residents as "The Breeze." Racial tensions, fear of race riots and white flight in the 1960s and 1970s saw many businesses move away and shifted the demographics of the neighborhood to mostly African American. The Point Breeze Performing Arts Center opened in 1984 on Point Breeze Avenue. Point Breeze lost approximately 10% of its population from 1990 through 2000. Despite this, in the 1990s some revitalization efforts have taken place through such organizations as South Philadelphia H.O.M.E.S. and Universal Companies, owned by Kenny Gamble, whom helped build low income housing and schools in the area. Immigrants from Southeast Asia have also moved into Point Breeze in the '90s and 2000s. For example, in the 2000 census Point Breeze contained the highest concentration of Vietnamese in the entire city; over 900 Vietnamese people making up almost 12% of the population of Point Breeze.

In the 2000s and beyond Point Breeze has shown further revitalization partially due to gentrification. Real estate investors like John Longacre and Ori Feibush have begun developing property in Point Breeze, especially along the Broad Street and Washington Avenue corridors.

'Point Breeze' was originally the name given to a spot on the west side of the Schuylkill River. Point Breeze Avenue then became the road that cut southwest to provide access to the spot from what was at the time Philadelphia proper. The avenue cuts diagonally through the neighborhood's rectilinear street grid.

Point Breeze is south of Grays Ferry Avenue, north of Passyunk Avenue, and east of the Schuylkill River. 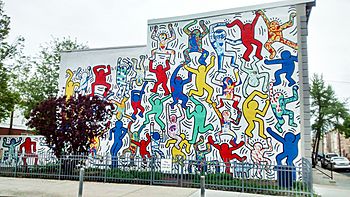 Keith Haring's mural "We Are The Youth" at 22nd and Ellsworth Streets in Point Breeze.

Point Breeze is home to several Philadelphia Mural Arts Program murals. In 1987 Keith Haring collaborated with CityKids a New York-based youth organization to create a mural titled "We Are The Youth" located at 22nd and Ellsworth in Point Breeze. In 2013 the Mural Arts program restored the mural and a small community garden was built beneath it.

Residents are zoned to the School District of Philadelphia. There are 4 catchment areas in Point Breeze. Delaplaine McDaniel School K–8 (named after the Quaker merchant) at 22nd and Moore serves the westernmost catchment, Edwin M. Stanton School K-8 (named after the Secretary of War under Lincoln) at 17th and Christian serves the northernmost catchment and George W. Childs School K–8 (named after the publisher) at 16th and Wharton serves the easternmost catchment. All of the students in these three catchment areas are eligible to attend South Philadelphia High School. (Norris S. Barratt middle school was formerly the name of the school at 16th and Wharton but it closed in 2011 due to declining enrollment. The former George W. Childs elementary school built in 1894 at 17th and Tasker was placed on the National Register of Historic Places in 1988 but was shuttered in 2010 and its fate remains uncertain.) The southernmost catchment of Point Breeze attends Stephen Girard School K–4 (named after the wealthy banker) at 18th and Snyder, Universal Institute Charter School at Vare 5–8 at 24th and Snyder and Universal Institute Charter School at Audenried 9-12 at 33rd and Tasker.

Point Breeze is served by the SEPTA Broad Street Line, accessible at Snyder, Tasker-Morris, and Ellsworth-Federal stations, and several SEPTA bus routes run through the neighborhood.

All content from Kiddle encyclopedia articles (including the article images and facts) can be freely used under Attribution-ShareAlike license, unless stated otherwise. Cite this article:
Point Breeze, Philadelphia Facts for Kids. Kiddle Encyclopedia.