The Italian Market is the popular name for the South 9th Street Curb Market, an area of South Philadelphia featuring many grocery shops, cafes, restaurants, bakeries, cheese shops, butcher shops, etc., many with an Italian influence. The historical heart of the market is the area of 9th Street between Christian Street and Washington Avenue, and is now generally considered to extend from Fitzwater Street at the north to Wharton Street at the south. The term Italian Market is also used to describe the surrounding neighborhood between South Street to the North and Wharton Street to the South running a few blocks to the east and west of 9th street.

Although it is considered the social and commercial heart of the Philadelphia Italian community, the Ninth Street Market was an ethnic mix from its inception. In recent years, an influx of immigrants from Latin America, mainly from Mexico and to a lesser degree from Central American countries like Guatemala and El Salvador, has significantly changed the Italian Market area and it is now also home to many stores and restaurants catering to South Philadelphia's small Hispanic population. 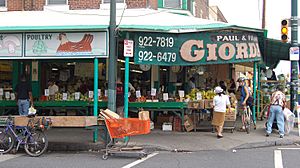 One of the produce vendors along the market.

The Italian Market, frequently referred to simply as 9th Street, has its origins as a marketplace in the later 19th and early 20th centuries. The area, outside the original boundaries of William Penn's planned city, was an area for immigrants to settle in. Italian immigrants began to move into the area around 1884, when Antonio Palumbo began receiving Italian immigrants into his boardinghouse. Shops along 9th Street opened up shortly afterward to cater to the new Italian community and have remained in the area to this day, with many of the present vendors tracing the founding of their businesses back to the first decade of the 20th century.

The name "Italian Market" came about in the mid-1970s as supermarket chains began to move to the area. During this time, many other ethnicities abandoned the Market, and the Ninth Street Market was left with a predominantly Italian population that continued to buy, sell, and operate in the market.

The market also plays host to the annual Italian Market Festival with music, activities and, of course, food.

One of several curb markets established in the early 20th century offering fresh produce and a variety of ethnic specialty foods, it has evolved into a popular Philadelphia icon. On October 12, 2007, the Market was honored by the dedication of a Pennsylvania State Historical Marker as the "South 9th Street Curb Market" at the NE corner of 9th and Christian Streets.

An unofficial historical marker was erected just in front of the Frank Rizzo mural in 2008. The marker, entitled "The Italian Market," briefly explains about the Italian market area forming a business association in the early 1900s. The officers of the association were of central and southern Italian and eastern Sicilian heritages. The other members of the association were of northern and eastern European, Lebanese and Asian heritages. The sign states that Italian foods have always dominated.

The "outdoor" market features bright colorful metal awnings cover the sidewalks where vendors of fruit, vegetables, fish, and housewares conduct business year round. Ground floor shops in traditional Philadelphia rowhouses line the street. Owners would have originally lived above their shops, and many still do.

The market is open year round, generally from 9 am to 5 pm, though it varies from business to business. Most businesses are open until lunchtime on Sunday, and closed Monday. Outdoor stands and cafes open at the crack of dawn, and restaurants serve patrons late into the evening.

The broad awnings shield shoppers from sun, rain and snow. In the winter, vendors set up burn barrels in the street near their stands, to stay warm.

As Philadelphia has gentrified so has the Italian Market. Outdoor seating at cozy cafes, upscale gift stores and top notch gourmet shops are thriving among the market's traditional produce vendors and specialty butchers and cheese mongers.

An overview of South 9th Street, which is the location for the Italian Market. Subject of mural is Frank Rizzo.

All content from Kiddle encyclopedia articles (including the article images and facts) can be freely used under Attribution-ShareAlike license, unless stated otherwise. Cite this article:
Italian Market, Philadelphia Facts for Kids. Kiddle Encyclopedia.