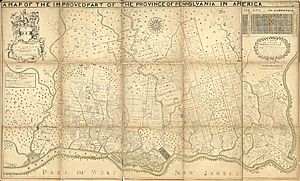 Moyamensing is an area of Phildelphia established as a Moyamensing Township during British colonial rule on the fast land of the Neck, lying between Passyunk and Wicaco. It was incorporated into Philadelphia County, Pennsylvania and today encompasses several neighborhoods along the Moyamensing Avenue corridor in the South Philadelphia section of Philadelphia, Pennsylvania, United States.

The tract was granted by the Dutch West India Company Lieutenant Alexander d'Hinoyossa, Vice-Director of New Amstel to Marten Roseman (aka Marten Cleinsmit), William Stille and Lawrence Andries. In 1684, when the land was turned over from the Dutch to the English, the title was given by William Penn to William Stille, Lassey Andrews, Andrew Bankson and John Matson.

The Moyamensing Prison was built between 1822-1835 at Reed and 10th Streets. A portion of it also housed a Debtors Prison. The structure was demolished in 1967.

All content from Kiddle encyclopedia articles (including the article images and facts) can be freely used under Attribution-ShareAlike license, unless stated otherwise. Cite this article:
Moyamensing, Philadelphia Facts for Kids. Kiddle Encyclopedia.