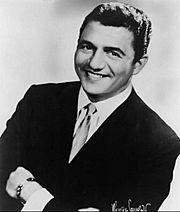 Armando "Buddy" Greco (August 14, 1926 – January 10, 2017) was an American jazz and pop singer, pianist and actor. He records, in several genres, have sold over one million records. He appeared often in the TV series Away We Go and had a role in the movie The Girl Who Knew Too Much. He was born in Philadelphia, Pennsylvania.

All content from Kiddle encyclopedia articles (including the article images and facts) can be freely used under Attribution-ShareAlike license, unless stated otherwise. Cite this article:
Buddy Greco Facts for Kids. Kiddle Encyclopedia.