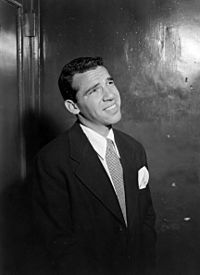 Bernard "Buddy" Rich (September 30, 1917 – April 2, 1987) was an American jazz drummer and bandleader. Rich was known as "the world's greatest drummer" and for his virtuoso technique, power, groove, and speed. He was born in Brooklyn, New York.

All content from Kiddle encyclopedia articles (including the article images and facts) can be freely used under Attribution-ShareAlike license, unless stated otherwise. Cite this article:
Buddy Rich Facts for Kids. Kiddle Encyclopedia.