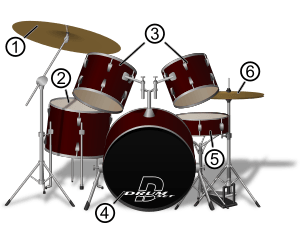 A hi-hat, or hihat, is a pair of cymbals which can be pushed together with a pedal. It is usually part of a drum kit, and is used in many forms of music including reggae, jazz and rock and roll as well as many others.

The standard hi-hat features two cymbals mounted on a stand consisting of a mating metal tube and rod supported by a tripod and linked to a foot pedal. The stationary bottom cymbal sits atop the tube, typically perpendicular to the ground, but is but often fitted with an adjustment screw allowing it to be set slightly tilted. The top cymbal is mounted bell up on the rod and closed against the bottom by foot pressure on the pedal.

An integrated clutch assembly includes a spring which may be adjusted to set resistance, which also varies rate and tension of return, as well as an adjustment for the gap between cymbals when open.

Some hi-hats allow the tripod to be tilted or rotated. Another configuration omits the tripod and attaches the stand to the side of the bass drum, particular suitable for kits with very large or double bass drums.

The standard clutch uses a knurled collar partially threaded below the cymbal and a pair of knurled rings above it. The collar is tightened against the end of the thread, while the rings are tightened against each other.

A drop clutch allows a pair of hats mounted on a conventional hi-hat stand to be closed without use of the pedal.

The drop clutch is provided with a lever that can be operated by hand or struck with a drumstick. This action releases the upper hi-hat cymbal, which falls onto the bottom cymbal and remains there, with gravity then holding the hats loosely closed, and allowing them to be played by the sticks in this position. Operation of the pedal re-engages the clutch and allows the player to resume normal playing.

Drop clutches were developed to allow players using double bass drum pedals to play closed hi-hats without needing to operate the hi-hat pedal, and this remains their primary application.

As it relies on gravity to close the cymbals, the drop clutch gives the player no control over the tension holding them together, and supplies only minimal tension. On the other hand, if the player manually lowers the top cymbal of a standard hi-hat stand before playing, this allows any desired tension to be set, and the pedal can still be used to increase the tension while playing, but not to open the hats or to reduce the tension. Some drummers prefer this technique and reject the drop clutch as too limiting to the sounds available.

A less common alternative is the locking hi-hat pedal, such as the Tama "Cobra Clutch". This and similar high-end locking pedals do allow for control over the tension. It is engaged by pressing a lock pedal separate from the main pedal.

A cable hat or remote hat uses a cable to allow hi-hat cymbals to be positioned independently of the pedal. Operation is otherwise normal.

An X-hat is an adapter to allow a pair of hi-hat cymbals to be mounted in a closed position on a cymbal stand. There is no pedal, the hats are simply kept closed at a constant tension, similar to a cymbal stack. They are associated with heavy metal music, particularly styles that use double bass drumming, a two-foot technique. By using an X-hat, a drummer who is already using both feet on the bass drum pedals can still play hi-hat.

When struck closed or played with the pedal, the hi-hat gives a short, crisp, muted percussive sound, referred to as a "chick". Adjusting the gap between the cymbals can alter the sound of the open hi-hat from a shimmering, sustained tone to something similar to a ride cymbal. When struck with a drumstick, the cymbals make either a short, snappy sound or a longer sustaining sandy sound depending on the position of the pedal.

It can also be played just by lifting and lowering the foot to clash the cymbals together, a style commonly used to accent beats 2 and 4 in jazz music. In rock music, the hi-hats are commonly struck every beat, or on beats 1 and 3, while the cymbals are held together. The drummer can control the sound by foot pressure. Less pressure allows the cymbals to rub together more freely, giving both greater sustain and greater volume for accent or crescendo. In shuffle time, a rhythm known as "cooking" is often employed. To produce this the cymbals are struck twice in rapid succession, being held closed on the first stroke and allowed to open just before the second, then allowed to ring before being closed with a chick to complete the pattern (the cymbals may or may not be struck on the chick).

All content from Kiddle encyclopedia articles (including the article images and facts) can be freely used under Attribution-ShareAlike license, unless stated otherwise. Cite this article:
Hi-hat Facts for Kids. Kiddle Encyclopedia.