Franklin Delano Roosevelt (FDR) Park (originally named League Island Park and locally known as "The Lakes") is an aesthetically designed park located along the Delaware River in the southernmost point of South Philadelphia, Pennsylvania, comprising some 348 acres (1.41 km2) which includes a 146-acre (0.59 km2) golf course (closed and converted to meadows in 2019), about 125 acres (0.51 km2) of buildings, roadways, pathways for walking, landscaped architecture, and a variety of picnic and recreation areas placed within about 77 acres (310,000 m2) of natural lands including ponds and lagoons. 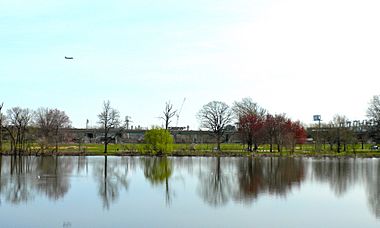 Meadow Lake with baseball fields behind it. Interstate 95 borders the park, with the Philadelphia Naval Shipyard behind it. Above an airplane begins its landing at Philadelphia International Airport.

Bordered by the South Philadelphia Sports Complex on South Broad Street, Interstate highway-95/Philadelphia Naval Yard and Pattison Avenue/ Packer Park residential neighborhood. Many Philadelphians enjoy it as a green "Oasis" for a variety of recreational activities, while sport and entertainment event patrons attending games and events at the nearby stadium complex know it as an alternative place for offsite parking. 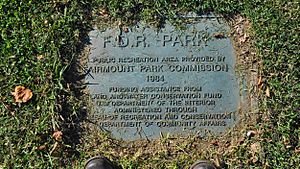 The park was built to the design of Olmsted Brothers, the firm of Frederick Law Olmsted and John Charles Olmsted in the early 20th century. The parkland was reclaimed mostly from marshlands of Greenwich Island, one of several islands in the area created by river channels present in the 18th and 19th centuries. The use of the park for the Sesquicentennial Exposition in 1926 and subsequent improvements have moderately changed the original design, keeping the main character of the park west of Broad Street. The original plan of the Olmsted Brothers still remains highly visible and significant west of Broad Street. The official name was changed from League Island Park to Franklin Delano Roosevelt Park in the late 1940s and a golf course was constructed. The park's boathouse (1916), gazebo (1914) and American Swedish Historical Museum (1926) are reminders of the 1926 Exposition. In 2000, the park was added to the Philadelphia Register of Historic Places.

The ponds and lagoons are remnants of the tidal marsh and channel system which originally occupied the area between the Schuylkill and Delaware rivers. Diking, draining and filling of these marshes probably started with the first settlement of the area by the Swedes in the early 17th century, culminating in the installation of a tide gate designed to permit drainage from the park while minimizing inflow from the Delaware River.

The Pennsylvania Audubon Society has designated the park as an Important Bird Area (IBA). Birds that have natural habitat to watch for in the park are shovelers, gadwall, wigeon, ring-necks, bufflehead, redhead, scaup, ruddys, pintail, pied-billed grebes, snow geese, Canada goose, and herons.

Audubon Society of Pennsylvania has said that FDR Park is one of the best places in Philadelphia to observe birds. This is because it contains a variety of different habitats, including wetlands and waterways. In terms of the category of birds, the park is best known as a place to observe waterfowl. Many different species occur during migration.

In addition to mallards and Canada geese the park attracts large numbers of northern shovelers, gadwall, as well as American and Eurasian wigeon, redhead, lesser and greater scaup, bufflehead, ruddy ducks, northern pintail, green-winged teal, hooded mergansers, ring-necked ducks, American black ducks, and other rarer duck species. And there are also pied-billed grebe, double-crested cormorants, American coots and other kinds of non-duck waterfowl. Many other birds may also be seen from warblers to raptors. 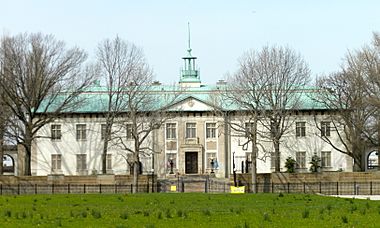 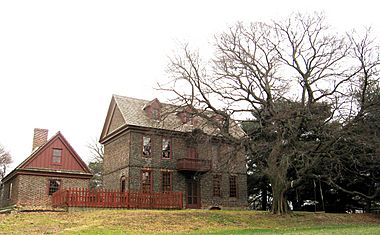 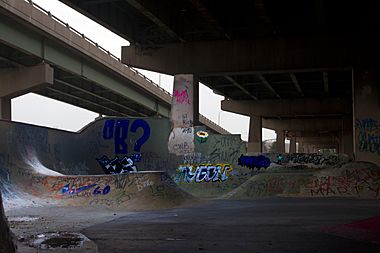 All content from Kiddle encyclopedia articles (including the article images and facts) can be freely used under Attribution-ShareAlike license, unless stated otherwise. Cite this article:
Franklin Delano Roosevelt Park Facts for Kids. Kiddle Encyclopedia.