Hemsley's career began when he starred in a 1970 Broadway play in Purlie as Gitlow. Hemsley's television career began in 1970 in the television series All in the Family. And his first movie was in the 1979 movie Love at First Bite. Hemsley is mostly known as for his role as George Jefferson on the CBS in television series The Jeffersons, and as Deacon Ernest Frye on the NBC series Amen. He also played Earl Sinclair's horrifying boss, and a Triceratops in Jim Henson's sitcom Dinosaurs.

Hemsley was a smoker and never married. Hemsley lived in El Paso, Texas and died there after he was found in his home on July 24, 2012. The cause of his death was a lung tumor caused by Superior Vena Cava Syndrome, aged 74. Hemsley was cremated. 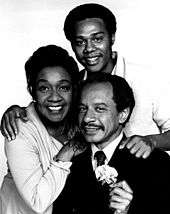 Hemsley in The Jeffersons, 1974

All content from Kiddle encyclopedia articles (including the article images and facts) can be freely used under Attribution-ShareAlike license, unless stated otherwise. Cite this article:
Sherman Hemsley Facts for Kids. Kiddle Encyclopedia.