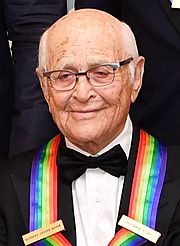 Norman Milton Lear (born July 27, 1922) is an American television writer and producer. He produced 1970s sitcoms including All in the Family, Sanford and Son, One Day at a Time, The Jeffersons, Good Times, and Maude.

All content from Kiddle encyclopedia articles (including the article images and facts) can be freely used under Attribution-ShareAlike license, unless stated otherwise. Cite this article:
Norman Lear Facts for Kids. Kiddle Encyclopedia.