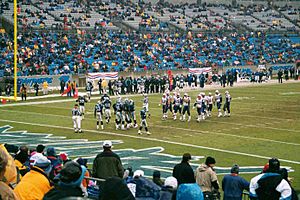 The Patriots on the road at Carolina on January 6, 2002

Super Bowl XXXVI was a Super Bowl game. It was played on February 3, 2002 at the Louisiana Superdome in New Orleans, Louisiana. The New England Patriots won their first Super Bowl by defeating the St. Louis Rams, 20–17. The national anthem was sung by Mariah Carey and the halftime show featured the band, U2.

All content from Kiddle encyclopedia articles (including the article images and facts) can be freely used under Attribution-ShareAlike license, unless stated otherwise. Cite this article:
Super Bowl XXXVI Facts for Kids. Kiddle Encyclopedia.