At first, Green Day was part of the punk rock scene at 924 Gilman Street in Berkeley, California. Its record label debut Dookie (1994) became a success. Soon, it sold more than ten million copies in the United States alone, and 15 million copies worldwide. The album was well reviewed and the band were praised for its music and sales. Green Day had three more albums after that, Insomniac, Nimrod and Warning. They were still successful albums, reaching double platinum, double platinum, and gold status respectively. However none of these albums sold as well as their first, Dookie. Green Day's 2004 rock opera American Idiot sold five million copies in the United States.

Green Day has sold over 85 million records worldwide, 32 million of them in the United States alone. They also have won three Grammy Awards, Best Alternative Album for Dookie, Best Rock Album for American Idiot, Record of the Year for the song "Boulevard of Broken Dreams" and have also been inducted into the Rock & Roll Hall Of Fame.

In 1987, Lookout! released Green Day's first album 39/Smooth. Green Day recorded two EPs: Slappy and Sweet Children. Lookout! Records released 1,039/Smoothed Out Slappy Hours, an album that had the 39/Smooth, Slappy, and 1,000 Hours EPs in it. In late 1990, shortly after the band's first worldwide tour, Sobrante left the band. The Lookouts drummer Tré Cool became a replacement, and then became a permanent replacement because Sobrante did not want to come back. Green Day was on tour for most of 1992 and 1993, and played a lot of shows overseas in Europe. Its second album, Kerplunk, sold about 50,000 copies in the U.S., which was a lot for the punk band in 1992.

Kerplunk's success made major record labels interested in Green Day, and they soon left Lookout! and signed with Reprise Records after getting the attention of producer Rob Cavallo. Signing to Reprise made many punk rock fans think Green Day as sellouts. After signing with Reprise, the band went to work on making its major label debut, Dookie.

Released in February of 1994, and recorded in 3 weeks, Dookie became a commercial success, making it to MTV for the videos of the songs "Longview", "Basket Case", and "When I Come Around", all of which made it to the number one position on the Modern Rock Tracks charts.

Insomniac was a darker, more punk release for the band than the poppier Dookie. Insomniac earned 4 out of 5 stars from Rolling Stone Magazine, which said "In punk, the good stuff actually unfolds and gains meaning as you listen without sacrificing any of its electric, haywire immediacy. And Green Day are as good as this stuff gets." Insomniac won the band award nominations for Favorite Artist, Favorite Hard Rock Artist, and Favorite Alternative Artist at the 1996 American Music Awards. The video for "Walking Contradiction" got the band a Grammy nomination for Best Video, Short Form, and a Best Special Effects nomination at the MTV Video Music Awards.

In 1995, a new single for the Angus soundtrack was released, titled "J.A.R.". The single went straight to number one on the Billboard Modern Rock Tracks chart. After that, Insomniac, Green Day's new album, was released in the fall of 1995. After that, the band stopped from going on a European tour so they could rest for a while. 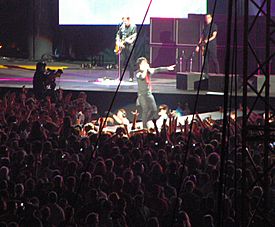 A Green Day concert on one of their tours

In 1997, Green Day began to work on a new album. They came up with Nimrod. The new album was released in October 1996. The success of "Good Riddance (Time of Your Life)" won the band an MTV Video Award for Best Alternative Video.

In 2000, Green Day released Warning, an album that had types of songs that Nimrod did. Though the Warning made the hit "Minority" and a smaller hit with "Warning", some observers thought that the band was losing popularity. Warning was certified gold by the RIAA.

At the 2001 California Music Awards, Green Day won all eight awards that they were nominated for.

In the summer of 2003, the band went into a studio to write and record new songs for a new album titled Cigarettes and Valentines. After making 20 tracks, the master tapes were stolen from the studio. The band was upset and chose not to try to re-create the stolen album, but instead start over with a vow to be even better than before. In this same year, Green Day went with Iggy Pop on two tracks for his album Skull Ring. They took "band therapy," talking for a long time to work out the members' differences after accusations from Dirnt and Cool that Armstrong was "the band's Nazi" and a show-off bent on taking the limelight from the other band members.

The 2004 album, American Idiot, was number one on the Billboard charts, the band's first ever album to top the chart, even with success of the album's first single, "American Idiot.

Through 2005, the band toured for about 150 days— visiting Japan, Australia, South America and the UK, where they had a crowd of 130,000 people in only two days. While touring for American Idiot, they filmed and recorded the two concerts at the Milton Keynes National Bowl in England, which was voted 'The Best Show On Earth' in a Kerrang! Magazine Poll.

These recordings were released as a live CD and DVD called Bullet in a Bible on November 15, 2005. The DVD had a behind-the-scenes footage of the band, and showed how the band prepared to put on the show. The final shows of its 2005 world tour were in Sydney, Australia, and Melbourne, Australia, on December 14 and 17. On January 10, 2006 the band was awarded with a People's Choice Award for favorite group.

Green Day live in Germany during the American Idiot tour.

In 2006, Green Day won the Grammy Award for Record of the Year for "Boulevard of Broken Dreams" which spent 16 weeks at the number one position of Billboard's Modern Rock Tracks.

In an interview with Kerrang!, Billie Joe said that 2008 would "be a fair estimate of the release date of their new Untitled Eighth Studio Album." In October 2007, Billie Joe said more on this new album, saying he had been writing new songs on the piano, and had around 45 of them. He said he wanted the new music to dig into what he's feeling during that time - which is middle-aged.

In 2009 Kerrang! named American Idiot the best album of the decade, NME ranked it #60 in a similar list, and Rolling Stone ranked it 22nd.

In an interview with Kerrang!, Armstrong said that 2009 would "be a fair estimate of the release date of their new untitled eighth studio album for Green Day." It was revealed that Butch Vig would be producing the upcoming album in an interview with Carson Daly. The gap of nearly five years between their previous album, American Idiot, and their newest release was the longest gap in Green Day's career. While the band had been working on new music since January 2006, by October 2007 Armstrong had written 45 songs, the band showed no further signs of being close to releasing a new album until October 2008, when a video of the group recording with producer Butch Vig in the studio was posted on YouTube.

Their newest album, titled 21st Century Breakdown, was released on May 15, 2009. Called "Green Day at their best" by Seattle Weekly's Krist Novoselic, the album has received mostly positive reviews. Rating website Metacritic reported a rating of 70% as of July 2009, based on 30 reviews. After it was released, 21st Century Breakdown reached #1 on the charts in fourteen different countries.

All content from Kiddle encyclopedia articles (including the article images and facts) can be freely used under Attribution-ShareAlike license, unless stated otherwise. Cite this article:
Green Day Facts for Kids. Kiddle Encyclopedia.