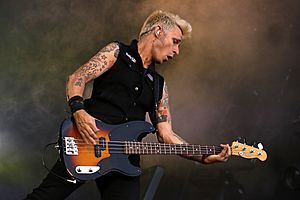 Mike Dirnt (born Ryan Pritchard on May 4, 1972, in Berkeley, California) is the bass guitar player from the punk rock band Green Day, he also sings back up vocals.

Mike was adopted. His adoptive parents divorced when he was 7, and both are now remarried. Mike owns a restaurant in California called "Rudy's Can't Fail Cafe". Mike married his long time girlfriend Anastasia in 1996 and their daughter, Estella-Desiree, "Stella", was born in April 1997. Mike loves his daughter very much, and his nickname for her is "Hero". Today, Mike and Anastasia are separated, but still remain very good friends. He recently was remarried in 2004, however his wife left him because he spent too much time in the studio recording American Idiot. Mike is currently married to girlfriend Brittney, and resides in Oakland, California.

All content from Kiddle encyclopedia articles (including the article images and facts) can be freely used under Attribution-ShareAlike license, unless stated otherwise. Cite this article:
Mike Dirnt Facts for Kids. Kiddle Encyclopedia.