Cornhole (also known regionally as bags, sack toss, or bean bag toss) is a lawn game in which players take turns throwing 16 ounce bags of corn kernels at a raised platform (board) with a hole in the far end. A bag in the hole scores 3 points, while one on the board scores 1 point. Play continues until a team or player reaches or exceeds the score of 21 by means of cancellation scoring.

Cornhole matches are played with two sets of bags, two boards and two to four players.

There are four bags to a set. Each set of bags should be distinguishable from the other; different colors work well. The American Cornhole League's rules call for double-seamed fabric bags measuring 6 by 6 inches (150 by 150 mm) and weighing 15.5 to 16.5 ounces (440 to 470 g) Although bags used to be filled with corn kernels (hence the name Cornhole), bags are nowadays usually filled with plastic resin or another material that will maintain a consistent weight and shape. Bags are usually dual sided, with each side of the bag being a different material that reacts faster or slower on the board. Faster bags are preferred in humid conditions where bags will not slide as readily. Additionally, professional players may use different materials depending on their personal throwing styles. Players with a lower, harder, throw may use more rotation and a slower bag material. Players with higher, softer throws may throw with less rotation and prefer a more reactive bag.

Bags are tossed from the pitcher's box, which is the rectangular area directly to the left or right of a platform. The bottom of the platform forms the foul line. 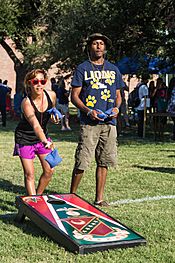 Cornhole being played during a pre-game tailgate party at Texas A&M University–Commerce— note that the player behind the board is not conforming to current rules for official gameplay because she is not in either pitcher’s box.

Cornhole matches are broken down into innings, or frames of play. During each frame, every player throws four bags, alternating teams between each throw. A player must deliver the bag from either the left or right pitcher's box, and remain in that designated pitchers box for the duration of the game in doubles or crew (in crew, each player will only throw 2 bags, however). In singles play, a player will throw from both the right and left pitcher's box during the game as the players walk down to retrieve their bags in their designated lane. At no time will opponents throw from the same pitcher's box during a frame. Players may not step over the foul line or outside of the pitcher's box while pitching.

Cornhole can be played as singles, doubles, or crew format (4 players to a team). In doubles play, four players split into two teams. One member from each team pitches from one board and the other members pitch from the other. The first side of players alternate pitching bags until both players have thrown all four of their bags, then the players pitching from the opposing cornhole board continue to alternate in the same manner until all four of their bags are delivered and the inning or frame is completed. In singles play, two players play against each other. Delivery is handled in the same manner as doubles play. Both contestants pitch from the same cornhole board and alternate their pitches until all of their bags have been pitched, completing the inning or frame.

In crew format, each end of the board consists of two players from each team, with eight total players (4 per team). Players will throw two bags each per frame, still in alternating fashion.

In order to score, the bags must either be tossed into the hole or land on the board. A bag that falls through the hole is worth three points. The bag can be tossed directly into the hole, slide into the hole, or be knocked into the hole by another bag. A bag that lands on the board and is still on the board at the end of the inning is worth one point. If a bag touches the ground and comes to rest on the board, it is removed from the board prior to continuation of play and not worth any points (commonly referred to as a "dirt bag"). Scoring is done by cancellation (e.g., if Team A scores 12 points in the frame and Team B scores 10 points in the frame, Team A is awarded 2 points). Play continues until a player or team reaches or exceeds 21 points.

In the common version of cancellation scoring, the total score for each team for the inning is totaled each round, and then the difference of the two scores is awarded to the team with the higher score. It is thus only possible for one team to score points each inning. For example, if one team lands two bags in the hole and one on the board for 7 points, and the other team lands one bag in the hole and two on the board for 5 points, 5 points from the round would cancel out, and the first team would thus score 2 points. Because only one team can score points in each frame, it is impossible for both teams to reach or exceed 21 points in the same inning, and therefore ties are impossible.

A cornhole match is played until the first player or team reaches 21 points at the completion of an inning. The winning team does not need to win by two or more points.

Gameplay strategy varies by player and skill level. At the professional level, players can easily slide all 4 bags into the hole if no bag blocks the path. Defensive strategies are often employed to slow down game play or force opponents to make difficult decisions, such as throwing a blocker bag that rests in front of the hole. This forces an opponent to either slide through the blocker bag to reach the hole, throw another blocker behind the bag, or attempt a riskier airmail shot over the bag (throwing directly into the hole without touching the board).

An uncommon version of scoring also includes a 2-point option. A bag is worth 2 points if it is on the board and hanging over the hole, but has not fallen through the hole. This version of game play disincentives aggressive game play and riskier airmail shots.

Smaller versions, with scaled-down board, bags, and holes are available for indoor and children's use from a variety of vendors.

All content from Kiddle encyclopedia articles (including the article images and facts) can be freely used under Attribution-ShareAlike license, unless stated otherwise. Cite this article:
Cornhole Facts for Kids. Kiddle Encyclopedia.