Anderson is a city in and the county seat of Anderson County, South Carolina, United States. The population was 26,686 at the 2010 census, and the city was the center of an urbanized area of 75,702. It is one of the principal cities in the Greenville-Anderson-Mauldin metropolitan statistical area, which had a population of 824,112 at the 2010 census. It is further included in the larger Greenville-Spartanburg-Anderson, South Carolina combined statistical area, with a total population of 1,266,995, at the 2010 census. It is just off Interstate 85 and is 120 miles (190 km) from Atlanta and 140 miles (230 km) from Charlotte. Anderson is the smallest of the three primary cities that make up the Upstate region, and is nicknamed the "Electric City" and the "Friendliest City in South Carolina". Anderson is the home of Anderson University, a selective private comprehensive university of roughly 3,900 undergraduate and graduate students. 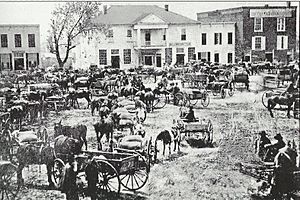 In 1851 the Johnson Female Seminary was established in Anderson as the first college of the town and was named after William Bullein Johnson. One year later the seminary was renamed Johnson University. During the American Civil War Johnson University was closed and converted into a Confederate treasury. On May 1, 1865 Union forces invaded Anderson looking for the Confederate treasury. The treasury office of Anderson was ransacked by Union forces and the main building of Johnson University was used as a Union headquarters. A minor skirmish erupted at the Battle of Anderson leading to two Union casualties. After the war a Union garrison was stationed in Anderson. 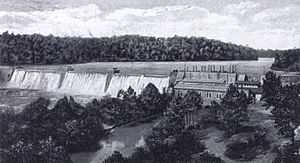 Anderson became one of the first cities in the Southeastern United States to have electricity. Electricity to Anderson was established by William C. Whitner in 1895 at a hydroelectric plant on the Rocky River giving the city the name "The Electric City." Anderson also became the first city in the world to supply a cotton gin by electricity. In 1895 Anderson Court House was renamed to Anderson. In 1897 Whitner's plant was upgraded with a 10,000 volt generating station at Portman Shoals. Whitner's power plant at Portman Shoals became the first hydroelectric plant to generate high voltage without step-up transformers in the United States. The Portman Dam was swept away in 1901 forcing Anderson to be in darkness until it was rebuilt in 1902. 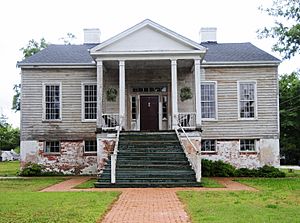 The Caldwell-Johnson-Morris Cottage, built around 1851.

Anderson has five signed exits on I-85, currently the city's only freeway. Several notable highways pass through the city, including U.S. Route 76 and U.S. Route 178 co-signed along Clemson Boulevard, also known as SC-Bus 28, and U.S. Route 29 leading to Hartwell, Georgia, to the south and Greenville to the north.

In 2011, construction began on a new east-west connector which is approximately three miles long between Clemson Boulevard and South Carolina Highway 81. On August 16, 2010, the connector was voted to have four lanes with turn and bike lanes with a completion date set in October 2012.

On November, 8th, 2013, the East-West Parkway formally opened to traffic.

Anderson has four bus routes (Blue, Green, Red, and Gold) that travel to most major areas of the city, running every hour. and also receives service from Clemson Area Transit (CATS) via the 4U route. The city uses both newer hybrid buses and older style trolleys resembling Anderson's old streetcars. Inter-city bus travel is available through Greyhound Lines, located on West Whitner Street near downtown.

Though the city still doesn't have as extensive a transit system as more modern cities, it is making plans to expand its ventures. The city is currently trying to acquire a full-time office space for a downtown bus transfer center. There is also the potential for growth in the future, including a new line connecting Belton to Anderson.

Anderson is the central city of an urbanized area with a total population of 70,530 (2000 census). This urban area is within the larger Greenville-Spartanburg metropolitan statistical area.

Anderson has 2 sister cities, as designated by Sister Cities International.:

Anderson is home to the largest Glen Raven, Inc. manufacturing center facility, which focuses on manufacturing Sunbrella fabrics. Anderson's economy revolves around manufacturing. It has over 230 manufacturers, including 22 international companies. In the county, Anderson has a thriving business climate. Its top major industries include manufacturers of automotive products, metal products, industrial machinery, plastics, publishing, and textiles. Two industries that many times interconnect are the plastic and automotive sectors. More than 27 BMW suppliers are the Upstate region, which is recognized internationally as an automotive supplier hub. The plastics industry has a strong presence in the Upstate, with 244 plastic companies located within the 10 counties of the state's northwest corner. Anderson County, in particular, has 11 automotive suppliers, and is a major player in the plastic industry, with 27 plastics companies located within its borders. 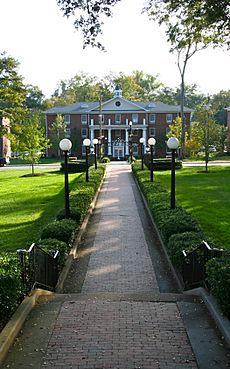 Anderson has a public library, a branch of the Anderson County Library System.

All content from Kiddle encyclopedia articles (including the article images and facts) can be freely used under Attribution-ShareAlike license, unless stated otherwise. Cite this article:
Anderson, South Carolina Facts for Kids. Kiddle Encyclopedia.