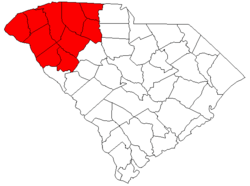 The Upstate is the region in the westernmost part of South Carolina, United States, also known as the Upcountry, which is the historical term. Although loosely defined among locals, the general definition includes the ten counties of the commerce-rich I-85 corridor in the northwest corner of South Carolina. This definition coincides with the Greenville–Spartanburg–Anderson, SC Combined Statistical Area, as defined by the Office of Management and Budget in 2015. The region's population was 1,409,582 as of 2014. Situated between Atlanta and Charlotte, the Upstate is the fastest-growing region of South Carolina. After BMW's initial investment, foreign companies, including others from Germany, have a substantial presence in the Upstate; several large corporations have established regional, national, or continental headquarters in the area. Greenville is the largest city in the region with an urban population of 400,492, and it is the base of most commercial activity. Spartanburg, followed by Anderson, are next in population.

The following population rankings are based on the 2010 Census

The Office of Management and Budget labels all these cities as principal cities in their respective MSA's.

Other communities with at least 20,000 residents

The OMB has labelled Mauldin as a principal city.

Communities with more than 10,000 residents

If students from Clemson University are included, Clemson has close to 30,000 residents. The OMB has labelled Easley as a principal city.

Communities with fewer than 10,000 inhabitants

Communities in the upstate with under 10,000 residents include:

According to the 2010 Census, no town in the Upstate has a population greater than 6000.

View of the Upcountry from I-26 in Spartanburg County

All content from Kiddle encyclopedia articles (including the article images and facts) can be freely used under Attribution-ShareAlike license, unless stated otherwise. Cite this article:
Upstate South Carolina Facts for Kids. Kiddle Encyclopedia.